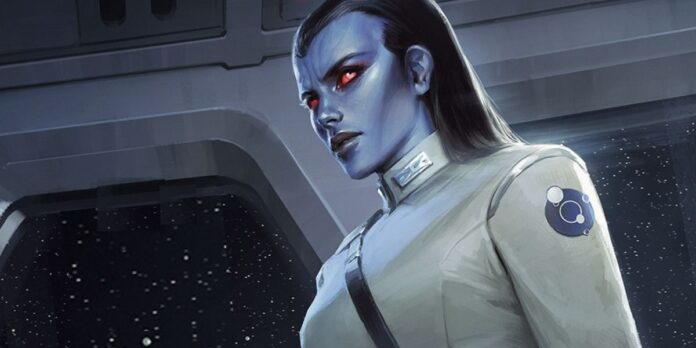 I happened upon Thrawn: Treason in one of my random bookstore wanderings pre-Covid. I had stepped away from anything Star Wars-related for at least five years, I had missed Thrawn’s return to the Star Wars canon…I had missed an entire trilogy (at least according to the back of the book.) It felt like saying hello to an old friend I hadn’t seen in almost eight years, but we picked up right where we left off.

Thrawn was still as cunning, ruthless, and artistically-enamored as I remembered, and it was a joy to see the Galaxy from his point of view for the first time. However, when I reached the end of Thrawn, I was immediately struck by a new character, one who seemed as enigmatic and proud as Thrawn was the first time I’d read about him: Admiral Ar’alani.

In Timothy Zahn’s Thrawn books, Ar’alani is an admiral in the Chiss Expansionary Defense Fleet (CEDF) who comes into play during the events of Thrawn: Treason. Ruthless, cunning, and with the absolute trust of her crew, Ar’alani is a force to be reckoned with and equal or superior to Thrawn in her leadership and warrior (as the Chiss understand it) abilities.

Ar’alani was everything I had ever wanted to see in a female character. I couldn’t get enough of her in the last chapters of Thrawn: Treason. I wanted to read more about her. The Maker granted my wish in Thrawn Ascendancy: Chaos Rising, where we get more of Ar’alani’s youth (then called Irizi’ar’alani), her backstory with Thrawn, the CEDF and the mysterious Chiss Ascendancy.

There is a lack of female representation in the Star Wars universe. This observation is nothing new nor ground-breaking; the fandom has been clamoring for years to see better representation. Save for a few smatterings here and there (mostly in the animation department,) Star Wars has yet to find a balance between masculine and feminine in their media.

I very rarely saw myself in many female characters growing up (even in the Galaxy far away.) Leia was an obvious choice, but maybe due to a lack of emotional maturity on my part when I first saw the movies I had difficulty resonating with her (although have come around in recent years.)

Padmé started out strong, but over the course of the prequels lost her autonomy and her narrative was steamrolled by the larger story unfolding between the Jedi and Sith, which felt like a waste of good characterization.

Rey was so close to being the heroine we all needed… but was sidelined in The Rise of Skywalker for yet another family legacy no one asked for and certainly did not want. What I wanted was a character who came from a name or place I didn’t know and became themselves in their own right: warrior and goddess.

Ar’alani and Thrawn: A Dyad OFF the Force?

Ar’alani’s story was, in a way, a refreshing reversal of Rey’s and Padmé’s. She was born into a powerful family name, which she chose to give up – along with ANY future family names – to serve in the Chiss Fleet, an act almost scandalous for a franchise so obsessed with lineage.

She succeeded through talent and instinct at garnering the respect of the incredibly demanding Expansionary Fleet, putting all her personal connections aside. Through her meteoric climb she remained kind in the most surprising ways — to children, to her subordinates and to her equals. To me, she embodied traditionally feminine and masculine virtues, strong yet kind, ruthless yet able to see the humanity and the value in everyone, not just among the Chiss.

Ar’alani is a warrior and this shows in the way she speaks, dresses (she’s never described in anything other than her CEDF or Admiral uniform, save for a single Memory,) and in her handling of various military and political situations.

In contrast, Thrawn’s love of art, his utilization of costumes and makeup to disarm his opponents and his (misleading) soft speech are ‘weapons’ traditionally given to manipulative women – the “kind, empathetic” sex. Which is funny, because Thrawn is very far a skilled politician and manipulator. His greatest weakness, which he rarely rises above even in his later years, is his lack of understanding of the political manipulation of others. Meanwhile, Ar’alani utilizes every strategic and tactical skill she has at her disposal to swiftly and without preamble, disarm and defuse tense political situations without engaging in political backstabbing.

When Thrawn describes Ar’alani’s fighting style as aggresive, it is not meant to be an underhanded insult. For all intents and purposes Thrawn and Ar’alani seem to be mirror opposites of what our modern society has traditionally deemed “masculine” and “feminine.”

Ar’alani knows who she is and what she will do to protect her people and those intertwining values complement rather than reject each other. It makes her a better warrior and allows her relationship with Thrawn to move into a deeper understanding of each other, truly highlighting their strengths and weaknesses.

They almost form a complementary, more serene dyad in their own right:  the masculinity and femininity inverted within the other, balanced and collaborative.

During the lead up to Chaos Rising, the publisher released a striking excerpt. After rescuing Thrawn from yet another court martial, Thrawn asks her to join him for an evening of what he calls ‘”insight, drama, and the excitement of discovery.”‘ She accepted, expecting to be wined, dined and maybe to dance the night away only to instead find…an art gallery.

While not the big night out she had been expecting, Ar’alani remained open to Thrawn’s ideas and didn’t immediately dismiss his explanation of how he liked to analyze art to understand his enemies, but rather put it towards a more practical use that applies to her as well. Right after that, Ar’alani playfully but aggressively engages Thrawn into trying out her favorite pastime, close-combat fighting… where she’s bested for maybe the first time in her life. Despite a short-lived dink in her pride, this only leads to grudging respect and the true beginning of their friendship.

Their relationship is both rare and truly wonderful in storytelling: an uncomplicated, down-to-earth partnership with shared high ideals, mutual trust and understanding. It is occasionally fraught with tension and miscommunication, but in the end, they both explicitly trust the other with their lives and those that they care for under their command. This is a wonderful example of how to build a solid foundation for a relationship that lasts across decades and star systems.

It feels like our own galaxy is creeping closer and closer everyday to something resembling either the Empire or First Order. As Maz Kanata said, “I’ve seen evil take many forms…” and with the recent death of Supreme Court Justice Ruth Bader-Ginsburg, the time for kind and cunning warriors who know how to collaborate and put the good of the People before their own interest has never been more vital.

I have been incredibly lucky in my life to have people, both fictional and real, around me mentoring and pushing me along my path to becoming who I am today. Characters like Ar’alani, who is both warrior and caregiver, general and friend, are more of what the world needs today and until the fight is won, may the warrior’s fortune be with us all.