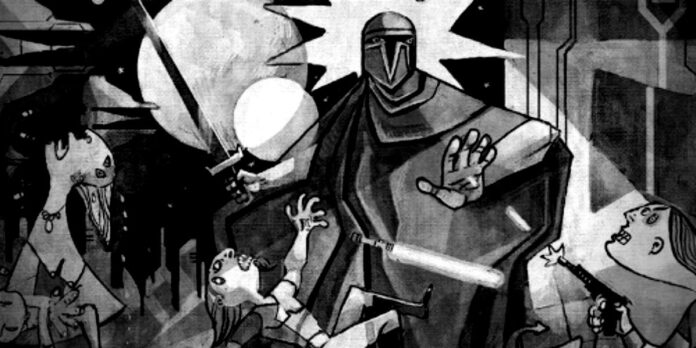 Mandalore is one of the most interesting ex-Republic cultures of Star Wars, and the one that we know the most about. Originally hinted at in the Expanded Universe, they got their own pre-Empire arc in Star Wars: The Clone Wars, an Empire one in Rebels and a New Republic arc in The Mandalorian. For some reason, Lucasfilm keeps returning to Mandalore over and over, leaving fans with a plethora of trivia about them – political structures, social mores, astonishing art, and family feuds and ties. But which elements from the real world influenced the creation of Mandalore, and what are these traces from our Galaxy telling us about this warrior culture?

While the Republic and the Empire were clearly inspired by Ancient Roman History, the Mandalorians trace their roots to the independent cities of Greece – more specifically, to Sparta, the polis that valued warriors the most, focusing their entire policies around bellicosity.

Spartans started training their children to be merciless warriors when they were seven years old, and adult males left their households for long periods of time, trusting the women to take care of domestic policies and the economy (much like Satine tried to do.)

After the fall of the Empire, very little was left of Mandalorian culture – but the martial element remained, focused around their veneration of beskar, the sacred metal that could protect them from almost any weapon and warded them against the Force. It’s no wonder that their matriarchal Armorer mirrored Hephaestus the miracle smith god of the Greeks. Much like The Mandalorian’s armorer did for the worthy, Hephaestus cast the weapons and armor of all the gods in Olympus. Hephaeustus also shares the element of fire with Hestia, the goddess of hearth and home – the Armorer syncretizes these two figures for the now clandestine Mandalorians.

Another interesting point in common with The Mandalorian is that although Hephaestus was the legitimate son of Hera and Zeus, he was hurled into the sea by his father because he was born lame (much like the Spartans threw any deformed baby over a cliff.) Hephaestus was rescued by Thetis, a goddess of the sea, only to later regain his place in Olympus because through his metalworking talent. Hephaestus is not the first god that was adopted, but his story parallels the fall of Mandalore, the Mandalorian’s adoration of foundlings, and the way that Mando and his people keep literally and metaphorically “rising” from the underground through their innovative inventions and found family ties.

As a bonus point, Hephaestus was widely revered in Athens, whose patron – you guessed it – was Athena – goddess of war, wisdom and inventors.

This one is a bit on the nose: there were actual Crusaders in Mandalore. They were a group of Mandalorians that had grown tired of fighting for money and wished to be paid in land; to accomplish this, they donned armor, wielded swords, and declared war on most of the planets around them. This eventually brought them into conflict with the Jedi, who were not so hot on yet another warmongering culture trying to take over the Galaxy.

The contact with the Jedi miffed Mandalorians; they had never encountered organized Force users with such combat prowess. Much like it happened in the real Crusades, this lead to massive technological advancements in the art of warfare – the use of beskar, the rocketpacks, and even the shape of the helmet was modified to repel and mimic the powers of the Jedi.

The Mandalorians of yore (and the Mandalorians of the Disney+ show) were extremely religious, and for them, combat and warfare were a way of communing with their gods. They didn’t so much as recruit soldiers as inspire individuals to join their cause by being exemplary in all their Ways. In Legends, Mandalore the First was himself a Crusader, and a mural of a Crusader wielding the Darksaber could be seen in The Clone Wars.

POLITICAL STRUCTURE: WELCOME TO THE RENAISSANCE

There’s nothing terribly original about Mandalorian political structures – like most militaristic cultures, they were shaped like stacked pyramids. The ruler (Mand’alor) acted like a Prince, with a series of Protectors that helped him enforce his rules.

The smallest unit was the Clan – who could be as tiny as two people – and Clans could belong to Houses, to which they deferred. Some Houses were more important than others, and found themselves at the center of all the political intrigues of the time. Just like the Medici of the Italian Renaissance, it is difficult to talk about the history of Mandalore without mentioning House Viszla, the political faction responsible for forging the Darksaber, founding the Death Watch, allying with Maul, and overthrowing pacifist ruler Satine Kryze.

Each House had vassals, clans that didn’t necessarily agree with each other and that could, in fact, be in open conflict. For instance, House Vizsla’s vassals were Clan Wren and Clan Saxon, with Clan Saxon allying with the Empire and Clan Wren opposing them. The vastness of space allowed each planet – under the control of one clan – to act, most of the time, as an independent state despite sharing a common culture and an overseeing ruler – much like the Italian city-states of the Renaissance.

AN ART HISTORY OF VIOLENCE: PICASSO AND THE GUERNICA OF SUNDARI

Eagle-eyed fans might have noted how very cubist Mandalorian art is. Satine Kryze’s portrait looks like a mix of Dora Maar’s and Marie-Therese Walter’s Picasso paintings, and there’s a massive black-and-white mural depicting a Mandalorian Crusader with the Darksaber that looks an awful lot like Picasso’s Guernica.

These are very smart references. Marie-Therese Walter had the same traits as Satine Kryze, and Dora Maar was a radical anti-fascist activist – just like Duchess Satine was a radical pacifist. Satine’s portrait appears later on, dark and defaced, like the fate of the ideals that she embodied until the Emperor rose.

The Guernica depicts the moment in 1937 when German bombers tested out the effects of an aerial strike on the civilian village of Guernica, in Northern Spain, the cradle of Basque culture and home to an ancestral tree. The stark black and white, the deformed, angled faces and the death are a manifest against war and weapons of mass destruction.

It is very interesting that in Mandalore the place of the German bomb is taken up by the Crusader wielding the Darksaber. While Pre Vizsla admires the mural, the artist behind it might have been trying to warn the Mandalorians about the horrors of war.

There’s also a homage to Goya’s May 3rd Executions — but rendered in Picasso’s style. This massive mural can be admired best in the duel between Palpatine and Darth Maul. Goya’s original depicted the Napoleonic execution of Madrid’s rebels after the French army took over the country, shooting any man that carried a blade longer than a kitchen’s knife. The Star Wars version shows Mandalorians shooting lightsaber-wielding Jedi, and the scene also foreshadows the Order 66.

Mandalore’s style takes an interesting turn in the Wren stronghold, where the portraits mimic Klimt’s massive gilded oil paintings rather than Picasso’s merciless cubism. However, the context behind the influence is still very similar. Klimt painted Adele Bloch-Bauer I with the most valuable metal: gold. In contrast, Ursa Wren’s portrait is rather greyish — it’s fair to assume that the metal used is probably beskar, which in the Star Wars Universe is almost priceless. Klimt’s masterpiece was stolen after the Nazis took over Vienna, alongside the rest of the collection — much like the Empire took over Wren’s Stronghold.

These are but a few of the sources of inspiration used to convey a sense of culture and history in Mandalore. There are many others. From a sociological point of view, the new way of life of Mandalorians in exile has more to do with secretive mercenaries — like ninjas, cossacks, or even certain Viking groups — than with the proud martial people. Their nomad nature, their bickering, and loyalty have many things in common with the Spaniard Kalé. Their love of children and communal raising could be a book on itself — and there’s also a lot to say about their totem animals, their domed cities and their incredible architecture, the most interesting of the entire Galaxy so far.