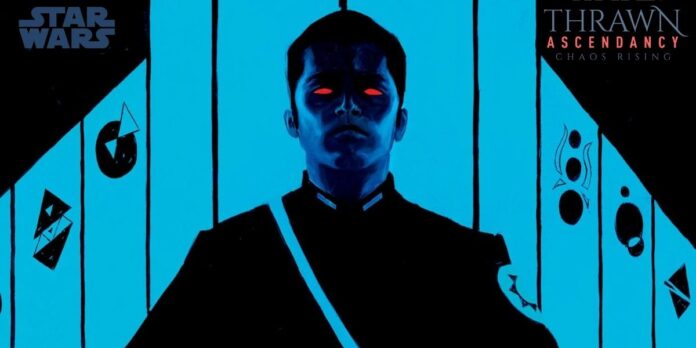 Star Wars: Thrawn Ascendancy – Chaos Rising by Timothy Zahn follows the formative years of the Emperor’s favorite Chiss, General Thrawn, the brilliant Chiss Admiral Ar’alani, and of Thalias and Che’ri, two Chiss sky-walkers (Chiss navigators that use the Force to find their way around the Chaos) as a sinister puppetmaster rises in the shadows.

The novel opens with a mysterious attack on Csilla, the hidden capital world of the secretive Chiss Ascendancy, and then jumps back and forth in time and points of view, chronicling the Chiss’s reaction and young Thrawn’s plan to avoid a future attack, defang any close threats and prevent a future massacre. The book also describes Ar’alani’s ascension to power, Thalia and Che’ri’s difficulties as sky-walkers, and the backstory of the Chiss.

This book is elevated Star Wars, and Zahn presents apparent and hidden philosophical questions to the reader. Is Thrawn’s approach of using preventive strikes right or merely practical? How is his instrumentalization of Thalias and Che’ri – as polite, considerate and truly “for the better good” as Thrawn is — better than the Emperor’s instrumentalization of everyone around him?  Why is the Force so stingy in this part of the Galaxy, if we are at all in the Galaxy?

What happens to societies that become obsessed with family bonds and lineages at every level of society? Can that kind of damage be reversed by creating a special, elevated class of individuals stripped from their families, dedicated to society as a whole, or does that only exacerbate the alienation? In a way, these are the same questions that the Skywalker saga asks, only that from a radically different and infinitely more practical point of view; the book will hopefully leave you munching these matters for a long time.

Chaos Rising is set before The Revenge of the Sith and around the same time as the events described in the flashbacks of Thrawn: Alliances. Both Anakin Skywalker and the planet of Batuu make a cameo.

Chaos Rising seems to have done away with the old canon, where Chiss reached maturity at ten. Developmentally, Chiss children and teenagers seem to be a mix of Vulcans (pardon the import) and humans of the same age.

Zahn also has a very delicate touch when it comes to romance and emotions – which might seem antagonistic to the Chiss that we know from The Clone Wars. However, the fact that Thrawn doesn’t usually show his feelings doesn’t mean that he doesn’t have them, nor that all the Chiss share one default personality. Under Zahn’s keyboard, Ar’alani’s lighthearted and level-headed ambition becomes delightful, Thalias’ unrequited love for Thrawn is (literally) intoxicating and Che’ri’s intense childhood fears will bring the readers back to their eight-year-old selves.

There’s a beautiful love triangle in between the lines of Chaos Ascending; Thrawn and Ar’alani clearly have a deep affection for each other born from their shared experiences and mutual respect; they become so close that Ar’alani invites him, a  Mitth merit-adoptive from an obscure family, to her ancestral home. Thrawn is her constant companion at work and in pleasure, and all of their off-work interactions read like dates: an art gallery on a rainy day, a visit to an exotic planet, a boozy celebration, and a sneaky trip to the capital where someone off-handedly mentions that the Chiss need to have more children.

On the other hand, Thalias infatuation is just as powerful, but her interactions with Thrawn mirror one of his deepest –if not his deepest – family traumas. In the hands of any other author, this incredibly unbalanced relationship would have become a parody of itself – particularly as it plays on well-known fanfic tropes as “fake captive” and “trapped together in a closet for hours” but instead we get growth, depth and subtle complexity. Thalias might not be an action amazon or an incredible military genius, but she’s pure heart and one of the best additions to the Star Wars universe.

Oh, yes. Who would have thought that the Chiss saw Thrawn as some kind of loser, despite his strategic genius? This less than flattering character assessment comes from Thrawn’s main weakness: his inability to properly read social cues and to navigate politics. His youth and inexperience only exacerbates this, and the novel makes it clear that he’s lucky to count on Ziara’s friendship and the mysterious protection of the Mitth family.

Although Zahn never writes from Thrawn’s point of view, this is not really necessary – through the eyes of Ar’alani, Thalias and Che’ri – as well as Qilori, a shrewd navigator that intersects Thrawn’s path in multiple occasions — we get a very clear picture of his personality, weaknesses, and motivations. This is a smart workaround to keep up the intrigue for what will Thrawn do next.

Qilori’s observations about Thrawn are strikingly accurate and hilarious; his perspective is similar to Eli Vantos’ snarky humor and is perfect for representing what the rest of the Chaos thinks about the Chiss. The ending, which features Ar’alani and Thrawn’s combined tactics and a deadly gambit based on absolute trust, might make the reader agree with Qilori’s prejudices… which is always intriguing.

Chaos Rising is laced with Mithraic mythological elements, from the name of Thrawn’s adoptive family (the Mitth) to their symbol (a halved rising sun), to the Chiss family structure, which mirrors the degrees of induction into the Mithraic rites, to their home planet, built almost entirely underground, just like Mithraic temples. Even the Trials that merit-adoptives have to undergo to join one of the great families permanently are similar, in structure, to those of the Mithraic faith.

This is a gross oversimplification, but the cult of Mithras originated in Northern India and Persia, evolved into Zoroastrism and Manicheism, and eventually was adopted by the Romans, who developed their own rituals. The name Mithras, which root is part of Thrawn’s full name, means “he who binds”; given that the Star Wars Republic and Empire were associated with the history of Ancient Rome, and that Thrawn was adopted by the Empire in order to bind both civilizations to each other, the parallels are perfect.

So, should you buy Thrawn Ascendancy: Chaos Rising? Yes, you should. This is a beautifully written book with memorable characters, smart commentary and a tight plot that delivers many emotional punches and turns the Chiss into the cool counterbalance to the passionate Republic and Empire that we know so well. It’s a must-have into any science fiction collection and will shine in any Star Wars library.

Characters like Ar'alani, who is both warrior and caregiver, general and friend, are more of what the world needs today and until the fight is won, may the warrior's fortune be with us all.
Read more
Discussion