Home Articles I Am A Jedi, Like My Master Before Me: Kanan Jarrus and...
Articles 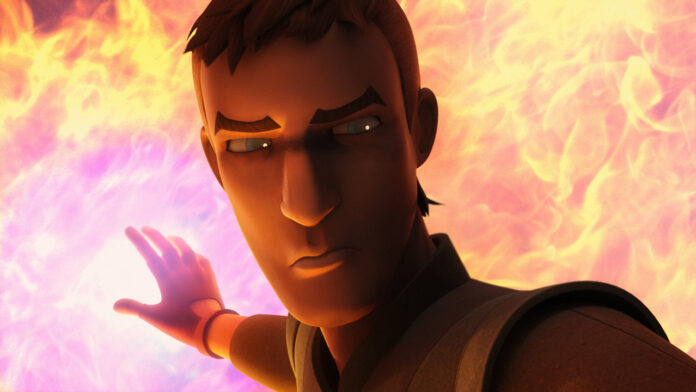 When Order 66 eradicated most of the Jedi Order, the Storm Troopers were so thorough that by the end of Revenge of the Sith there were, apparently, only two survivors of the massacre: Obi-Wan and Yoda. However, as  time went by, we learned of other characters who escaped Emperor Palpatine’s designs.

One of those characters was Caleb Dume — also known as Kanan Jarrus, the reluctant hero of Star Wars: Rebels and Ezra Bridger’s first Jedi master. Kanan was part of a motley group of rebels that conducted covert operations against the Galactic Empire on their freighter ship Ghost around the planet Lothal, but there was so much more to his story that would make the final flourish of his arc hit that much harder.

Kanan – then Jarrus – was first introduced in the book A New Dawn by John Jackson Miller. This novel was published in September 2014, a few days before the release of Star Wars: Rebels. A New Dawn described how Kanan met Hera Syndulla, his partner turned lover, while he tried to keep his identity hidden. We learned of his initial wishes of not getting back into the fight, and his snarky exchanges with such an interesting character as Rae Sloane in A New Dawn.

Kanan: The Last Padawan (or Star Wars: Kanan, as it was renamed) gave fans even more context about Caleb’s youngling years. Caleb’s master was Depa Billaba, who had been trained in turn by Mace Windu. Depa Billaba actually took Caleb under her wing a few months before the end of the Clone Wars, and he accompanied her in various dangerous missions.

The Last Padawan showcased Caleb’s personality. He was a curious youngling known for asking too many questions. Depa Billaba only had a few months to train Caleb, but her teachings lasted through the rest of his life – particularly her very last lesson.

Depa Billaba sacrificed herself to allow Caleb to run. Caleb survived on a foreign planet far away from Coruscant, changing his name to hide his identity and relying on the kindness of strangers.

In Rebels, Kanan was initially reluctant to take Ezra as an apprentice, because he never stopped being one: life as a padawan ended abruptly and very violently; nothing good could come of teaching Ezra what he knew, because what he knew was full of horrors.

Looking back, not a lot of us were optimistic about the odds of Kanan’s survival beyond the beginning of the Original Trilogy. When Master Yoda told Luke that he would be the last of the Jedi when he was dead, many assumed there would be no other Jedi or Force-users living by the time the Rebellion triumphs over the Empire.

There were some theories floating around that mentioned the Lasat world, Wild Space or even the Unknown Regions. Some mentioned the Mortis arc, and even those of us who were not optimistic about Kanan’s survival by the time A New Hope rolled in were hoping we would get a satisfactory conclusion for his story arc. And we were not disappointed.

In Season 2, Kanan loses his sight in Malachor, but in a smart callback to Luke’s blind training he gains the  mask of a fallen Jedi temple guard. Kanan is one of the last guardians of the Jedi teachings and Jedi order, and he has to look past appearances, past this crude matter, to embrace that knowledge.

Still, Kanan kept struggling with the Force until the end, until the moment when he made the ultimate choice to save his friends, his love and, unbeknownst to him, his unborn son. Again, in Jedi fashion he chooses to die for the sake of others — particularly those who will follow in his steps. In a way, he was following not only in the steps of Depa, but in those of Qui-Gon Jinn, Obi-Wan Kenobi, and even predicting Darth Vader’s last stand against the Emperor.

This lesson passed through generations of Jedi echoes in Kanan’s padawan. Ezra faced a choice when he saw the portal at the World Between Worlds; he had the opportunity to intervene as he’d just done to save Ahsoka. But Ahsoka herself points out that “Kanan gave his life so that you could live. If he is taken out of this moment, you all die. You can’t save your Master, and I can’t save mine. I’m asking you to let go.”

As Luke Skywalker said: “No one’s ever really gone”. And seeing the life and death of Kanan Jarrus, also known as Caleb Dume, gives us another great example of the true nature of a Jedi, willing to sacrifice themselves to save others.