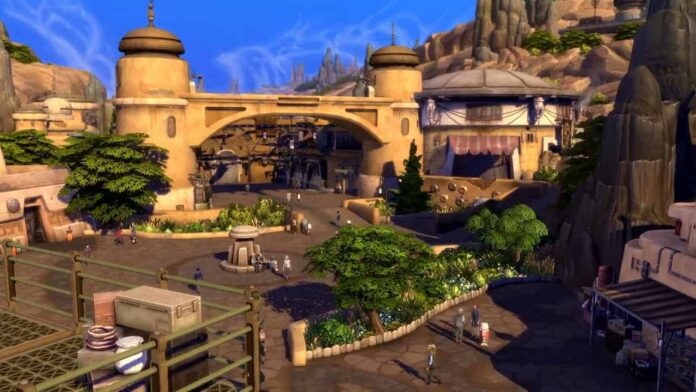 This is an in-depth review in two parts. The first part, below, is all about atmosphere and build mode. The second part, here, covers the gameplay and Create-a-Sim.

To the surprise of simmers and Star Wars fans, Maxis and Electronic Arts released their ninth game pack The Sims 4: Star Wars: Journey to Batuu this past September. Priced at 25 CAD, the game promised 135 unique items, 115 wardrobe pieces for Create-a-Sim, and a visit to the planet Batuu, where sims could join one of three factions available (Resistance, Scoundrels, and the First Order) and help their group become the dominant force at Black Spire Outpost.

Journey to Batuu isn’t the first Star Wars-themed simulation game, but it is the first in over two decades – the last one, Pit Droids, was released in 1999 as a puzzle game by Lucas Learning, LucasArts’ education spin-off. This also isn’t the first time that Lucasfilm has done a crossover video game – the few Angry Birds apps and a slew of LEGO video games should be evident enough.

But this is the first time that players can be taken inside the new Disney parks and interact with players, droids, and environments in a non-combative way. As a fan of both The Sims and Star Wars, I was pretty excited to get my hands on this pack. I like to test things out in a ‘casual player’ way, so my review will be focused on what Star Wars fans that play The Sims can get out of it, rather than what Simmers can – there’s already whole lot of videos and reviews from that perspective.

Accessing Batuu for the first time is a little confusing, as it the world not available on the screen, but through the in-game phone as a vacation option. This hones in on the fact that Batuu is a theme park and not a functioning world, and breaks immersion into Star Wars.

That said, the shell design is top-notch – I would often just pause and look at the landscape found at the Resistance Encampment, or admire the way the First Order District has a distinctly different vibe from the main part of Black Spire Outpost.

Batuu feels like a unique place that I would want to explore. A lot of credit should be given to the original team that put together Batuu at Disney – it is an impeccable design and it has a distinct flavor that feels like a mix of Naboo with its circular design, streets, and touch of vegetation, and Tatooine, with its colour palette and overall ‘grime’.

If anyone encountered a single one of these buildings out in the wild, it would be immediately recognizable as Batuu, which is a feat given that this planet has no visual tie-ins in terms of movies or television shows, and most fans of Star Wars have never even gone to Galaxy’s Edge.

The map is sprawling and empty. The sidewalks are wide and there are many places to rest and put your feet up as if you were visiting a park with high foot traffic. The buildings that provide food are very large as if expecting high foot traffic and the only new visitors are the ones controlled by the player, so in the end, the size is overkill.

With all this size, it’s disappointing that the only three interiors that are accessible are the Cantina, the Resistances’ underground bunker, and the First Order Headquarters (and classifying this one as an “interior” is debatable since the large loading bay-like door is always open.)

Some small areas look exciting, like the droid workstation in the First Order District, and the waterfall in the Resistance Encampment, but these are objects that you can’t interact with. In other words, what works in the park doesn’t work in gameplay.

I would have loved to see some alleys, both bright and cheery with lines of laundry being hung above and others dark and maybe more caked in grime, where shady deals and shadier people mil about – maybe even a small tower your sim could climb up, each floor encapsulating the culture of Batuu a bit like each Disney Castle in the parks around the world tells a different story. There is a novel about Black Spire the devs could have pulled from, and it’s a missed opportunity for fans.

Build Mode in The Sims 4 – Star Wars: Journey to Batuu

Journey to Batuu seems to have a robust collection of 135 items – from windows to sabacc tables. It seems like a lot, with awnings and piles of crates, and gorgeous seats, but that’s where the good things end and the not-so-good things start.

As a player, I’m not a fan of purely decorative items. Some simmers might find them helpful in creating atmospheres and such, but I am more curious about functional items that can inject some Star Wars-themed style and flair in regular gameplay.

In this comparison, I’m trying to give a sort of baseline as to what story building and play, with Star Wars in mind, could look like on different levels.

House C, the one only using Journey to Batuu items was so challenging I gave up. There just aren’t enough items in the pack, and my build looked like a barebones motel room.

It was a struggle. Supposedly atmospheric items ended either being so large that I would have to let go of a bathroom or were just plain useless. I had to add some custom content and a few base game items just to have a kitchen and make the place look less depressing.

If you look at the pack with utility in mind, it’s painfully obvious that around 50% are purely decorative items, and either trinkets or massive objects meant for outdoor settings.  Players who want to add some Star Wars flair to their regular The Sims 4 gameplay are better off working with existing items or custom content instead of purchasing Journey to Batuu. Here are a few ways you could approach doing that.

House A: Apartments Built with Base Game only

If going the base game route, note that it’s easier to achieve a feel for the First Order than the Resistance since the First Order aesthetic is pretty in line with standard minimalism, a dark palette, and steel.

If there were a few more grungy-looking furniture pieces, that banged-up, second-hand look, you could probably have more success with the Resistance apartments. If someone is looking for realistic Star Wars-themed simulation and storytelling with only their play, it isn’t too difficult to achieve with the base game.

Players with access to everything that The Sims 4 can offer (minus Batuu) can also create wonderful Resistance-flavoured builds with only minor mods, like Mini Summer’s Void-208B and Dasie2’s They landed.

House B: Apartments Built with Custom Content for Base Game Only

This is much better! These CC’s are all base game only – no game, stuff, or expansion packs have been installed. I only really picked from items I already had installed from The Sims Resource, and honestly, I think it looks okay. There are millions of custom content packs available in all corners of the web, and the only limit really is your download speed and imagination.

If you’re looking towards Journey to Batuu to give your dwellings and towns a Star Wars feel, prepared to look elsewhere.

This is a good spot to segue into gameplay, create-a-sim, missions, and lore or the absence thereof — look out for Part 2 of this review on Thursday, November 5th!

Nowreen Haque
Nowreen is a Canadian Exhibit Curator by day and a lore-hound by night. They knit thala-siren plushies and play too much Elder Scrolls Online. Specialty is the history of literacy. Poke them on twitter.

The Future of Star Wars is Small (but in a Good Way!)

Diversifying Star Wars films, focusing on fun individual stories and inventive genre takes could reinvigorate audiences. Satisfy them repeatedly with smaller entries until they can’t help but get excited for a new, high-budget trilogy where anything is possible. That or a puppet-heavy Max Rebo musical biopic (I’m only half-joking.)
Read more
Interview

Join our host Marie-Claire Gould (@mariecgould) for an interview with Amy Richau (@amyrichau) as we CELEBRATE her amazing achievement of 365 days of Star Wars...
Read more

Once Upon a Time in the Outer Rim: Episode 12 (The Mandalorian: The Seige)

Join our host Marie-Claire Gould (@mariecgould) and featuring our co-host Ty Black (@black_TyM), for Once Upon a Time in the Outer Rim:...
Read more

From a Child’s Point of View: A 4 Year Old’s Review of The LEGO Star Wars Holiday Special

This review contains spoilers. Note:  Hello everyone! My 4 year old is not a great typer, so this has...
Read more

This review contains spoilers. The LEGO Star Wars Holiday Special is our first real content after The Rise of...
Read more

Once Upon a Time in the Outer Rim: Episode 11 (The Mandalorian: The Heiress)

Join our host Marie-Claire Gould (@mariecgould) and featuring our co-host Ty Black (@black_TyM), for Once Upon a Time in the Outer Rim:...
Read more
Load more

No One’s Ever Really Gone: Star Wars and Grieving

When I was seven-years-old I had emergency surgery on my left knee that required a ten-day stay in the hospital. Since this...
Read more