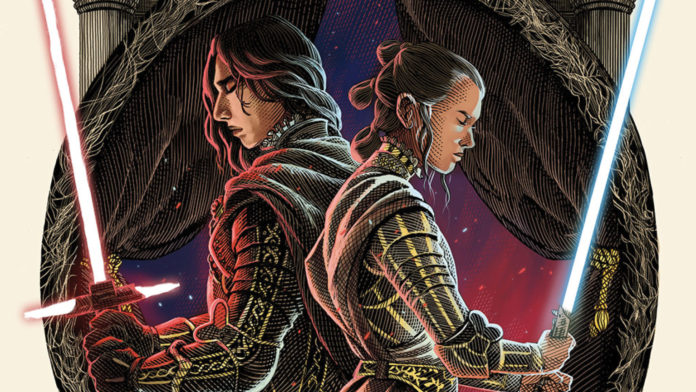 From the cover and title, The Merry Rise of Skywalker lets its readers know right away that this take on Star Wars Episode IX: The Rise of Skywalker will be a combination of tragedy and comedy, merging both genres from the bard into one unique creation. Rey and Kylo stand back to back on the cover with Leia below Kylo and Palpatine below Rey signifying the tragic opposition of their legacies and their fates. The title, however, a play on The Merry Wives of Windsor by William Shakespeare refers to a comedy where the audience’s favorite character is alive again for no reason, tongue in cheek just like Palpatine. That self-awareness is what makes this read such a cathartic experience. It acknowledges that both deep emotional sadness is to be found in this story along with the levity, something many fans craved from the film and the end of the saga.

Warning: From this point on, the review contains spoilers for The Merry Rise of Skywalker

For never was a story of more woe than this of Rey and her Ben Solo.

The narrative through line between The Rise of Skywalker and The Merry Rise of Skywalker is the tragic romance at the center of the story between Rey and Kylo Ren. Ian Doescher doesn’t shy away from the tragedy and it’s appreciated. He purposefully weaves parallel after parallel with Romeo and Juliet.

From Kylo’s opening line, “Two rivals, both alike in dignity,” to Rey’s final line with Kylo, “My life, I see, hath been his timeless end,” Doescher intelligently inserts verses that pull on heartstrings and prepares you for the upcoming tragedy. His verses also highlight the unique connection between the characters and how they are drawn to each other. The result is readers are given the time and space to grieve and find catharsis in the story.

The “Merry” in the Merry Rise of Skywalker

While the tragedy at the heart of the story is given its space, Doescher balances it with moments of levity. This is found most between Poe and Finn. Their verses together are full of merriment and banter. C-3PO who particularly shines in The Rise of Skywalker is also given funny verses and even gets to hold Poe’s hand when they do the group handshake after Pasaana.

Finally, Chewbacca, our “furry friend and confidant” provides much needed humor throughout the story. His verses are in Shyriiwook and then the translations below in the footnotes are hilarious and endearing.

Due to the nature of film, it’s hard to delve into the depths of characters’ internal thoughts and feelings. The play format allows The Merry Rise of Skywalker to highlight each character often multiple times through monologues.

Standouts for Kylo Ren include when he enters Exegol at the beginning of the story, while he’s thinking about Rey, and after seeing the memory of his father. These help make his moment of redemption truly triumphant. Rey is also given several lengthy monologues about Kylo, her actions throughout the story, and the familial legacy thrust upon her. It’s nice to have time with our heroine who was been through so much as she processes all of her feelings, and Doescher should be applauded for making it a priority.

Leia and Chewie are given monologues at significant moments in the story. Leia has space to reflect on her son and Chewie mourns Leia’s death in beautiful verses. Nearly every other character also has monologues that flesh out their feelings including Poe, C-3PO, Zorri, and Hux. Finn has several verses that are full of such heart, but I do wish that he and Rose were given significant monologues as well.

On the whole, The Merry Rise of Skywalker succeeds at being a retelling of The Rise of Skywalker by acknowledging both the tragedy and comedy found in the story. The genre lends itself to giving fans a unique way to not only process the story, but provide entertainment that will hopefully be a fun and healing experience.

With Chaos Rising, Timothy Zahn does a great job of combining intensely personal perspectives with political intrigue and military philosophy and strategy, building a fascinating novel that will delight Thrawn fans, intrigue classic Star Wars viewers and might open a smooth segue into the franchise for lovers of other science fiction universes like Star Trek, Dune or even The Left Hand of Darkness. A must read.
Read more
Articles

Review: The Clone Wars: Stories of Light and Dark Anthology

The Clone Wars: Stories of Light and Dark retells episodes of The Clone Wars in a similar way to a novelization. The...
Read more