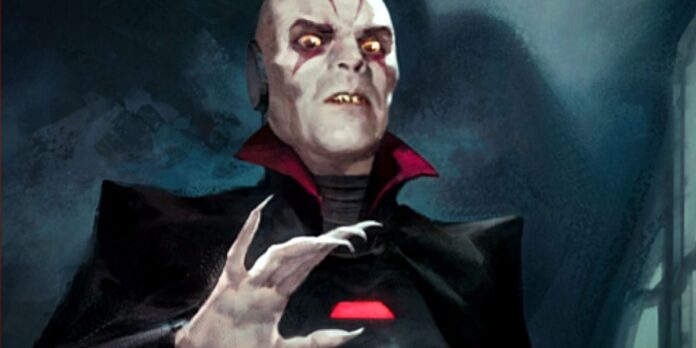 Dark Legends, written by George Mann and illustrated by Grant Griffin, is a short collection of Star Wars stories based on well-trodden horror tales. The seven legends are arranged in a loose chronological order (from a fan’s perspective – starting with The Clone Wars lore and finishing with a The Rise of Skywalker Exegol tale). Each legend is accompanied by an illustration, and the book is lovingly edited in the style of an Imperial Sith document.

George Mann is a good writer. For Dark Legends, he chose to follow the same XIX century moral tale imitation of Myths & Fables, his other Star Wars book, and he succeeds in reproducing that style. The mythical aspects of Star Wars are also present, particularly the fight between the light and the dark side of the Force, and Griffin’s illustrations by Grant Griffin are gorgeous and evocative.

However, the Dark Legends are not that original and not that scary… but they are extremely old fashioned in the worst sense. It’s unclear whether this was Mann’s intention, or if there was an editorial directive to keep it extremely PG and Hays Code compliant, but the result is a collection of musty, vaguely sexist and extremely moralistic tales that will put you to sleep.

For instance, The Orphanage is clearly based on Nosferatu and M: The Vampire of Dusseldorf: a mysterious figure –who turns out to be the Grand Inquisitor — keeps kidnapping Force-sensitive children from a Clone Wars orphanage until a plucky teenage girl asks for help through the Force. She doesn’t actually confront or kill him, acting only as the assistant of the Jedi that eventually answers her call.

Buyer Beware (where Galaxy’s Edge and Solo’s Dok Ondar collector makes a cameo!) is Star Wars version of The Mask; Blood Moon is a werewolf story, The Dark Mirror is Doctor Jekyll and Mr. Hyde the Jedi way and A Life Immortal revisits the Greek myths of Sibyl of Cumae and Tithonus, two people that tricked the gods into giving them eternal life but not eternal youth.

However, all of these stories have been used to one degree or another in different shows, films and books, and using well-known tropes reskinned for Star Wars would be perfectly good if they brought a new perspective to the trope… but they don’t. The heroic characters are sketches of archetypes, which makes it very difficult to empathize with them, and that’s terrible for horror stories. The one exception is Denholm, but then again… if you’ve seen any Star Wars you know that the poor guy is doomed from his first line, so why should you get invested?

The villain protagonists are so ridiculously evil that their bad endings feel like natural punishment (don’t dare to be ambitious, kids, or you’ll become corrupted, deformed and enslaved to your worst instincts). This also defeats the purpose of horror – horror is not supposed to ditch out justice and morally right endings, but to run a chill down your spine.

But what about sexism? Dark Legends has three tales with a female protagonist, three tales with a male protagonist and one tale where they share the spotlight. Every single one of the women is tricked by men – and that’s the source of their horror – and every man (except for Denholm, and again, poor guy) succumbs to his worst, most violent nature. It’s unclear why they picked these very specific twists, but after the fourth story they become frankly grating.

Now I’m addressing the lovers of monster romance in the audience: Dark Legends fights very hard against the idea of monster romance, particularly in The Orphanage, Blood Moon and The Gilded Cage. This book would like you to stop exploring that genre and go back to a time where women were pure of heart and free of sin, ambition and desire. The Gilded Cage is probably the most offensive of the bunch.

That said, Dark Legends works some pretty interesting Star Wars ideas into its myths. For instance, the lycanthropy in Blood Moon is caused by the solar flares emitted by a star with a core of cracked kyber, the macro version of the bleeding kyber crystals that power Sith lightsabers, which are inextricably linked to their wielder’s emotional state. Imagine an entire planet bathed on that kind of pain and you have an apt Homus Homine Lupus in the Galaxy far, far away.

The Dark Mirror could also be read as a call-out to the Jedi obsession with incorruptible pure goodness, and their eons-long quest to suppress their shadows instead of understanding and assimilating them.

“In recognizing the true horror of both his and his master’s failure and the terrible acts they had committed, Sol Mogra knew he could never face his Jedi masters, for the shame had already begun to consume him and would burn him up from inside, twisting him into a thing of hate.”

A Life Immortal, which follows a Sith Lady in her quest for eternal life in Exegol has a tongue-in-cheek connection to none other than Pickled Snoke from The Rise of Skywalker. As mentioned above, this legend seems to be based on the Sibyl of Cumae myth of eternal without eternal youth, and in Ovid’s The Metamorphoses, Sibyl’s body grew smaller with age until she could be kept in a jar… just like the protagonist remains in Exegol forever, shriveled and deformed (and maybe, after Palps arrived, in her own jar?).

The illustrations are also beautiful and very intriguing. Grant Griffin decided to paint the Grand Inquisitor from The Orphanage in a ’20s vampire style, claws and fangs included, and his vision of the Darth Lady of Exegol with a deformed assistant, Force lightning, a curved lightsaber, and that petrified lotus-like throne is wonderful and very reminiscent of Frankenstein imagery. Griffin’s strokes are very expressive, and his style is perfect for the genre.

So, should you buy Dark Legends? It depends. If you are looking for the ultimate collection of Star Wars horror stories, this is not it – but, to be fair, that collection might never exist. However, if you are a collector of beautiful objects, the book’s edition is exquisite – the font is beautiful, the subtle Sith and Imperial themed filigrees are very smart and the art is great.

As a whole, FACPOV – ESB is a resounding success. The volume is lovingly edited, sticking to the chronological order and geographical space of Episode V as much as possible and using every crevice, device, animal and minor character to explore forgotten areas and ignored themes.
Read more
Review