REVIEW: The High Republic: A Test of Courage by Justina Ireland

A fast-paced, adventure-filled entry-point into the High Republic era that grapples with big questions yet never feels preachy. An excellent introduction to this era that feels both dazzlingly new and comfortingly familiar. 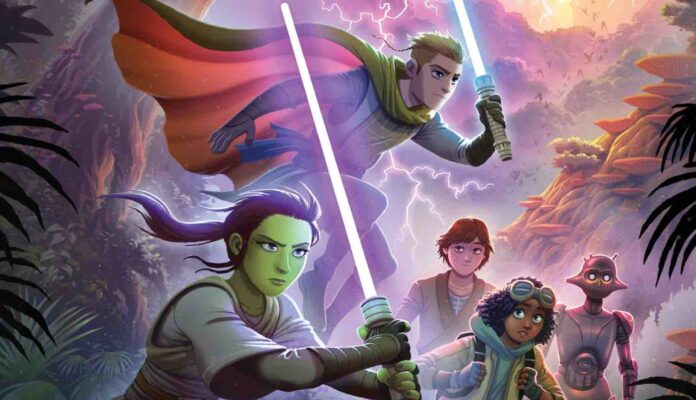 Unless you’ve been hiding under a rock for the past year (and hey, no judgement) you know about The High Republic–the project previously codenamed “Project Luminous” which claimed it would go somewhere previously uncharted by the cultural behemoth that is Star Wars. This massive cross-media undertaking, set hundreds of years before the Skywalker Saga, aimed to create an entirely new time period in the Star Wars universe, where the Jedi are on top and peace rules the galaxy. Some fans were psyched, while others were skeptical that this Jedi-heavy project could capture their attention. I must confess, I wasn’t particularly interested in this idea (I’m a flygirl myself–give me the cockpit of an x-wing and some pew-pews and I’m happy) but I went in with an open mind. A Test of Courage by Justina Ireland exceeded my expectations and has definitely whet my appetite for more content from this era.

WARNING: ANYTHING BELOW THIS LINE MAY CONTAIN SPOILERS FOR A TEST OF COURAGE

This is a junior (middle grade) novel, but it is not simplified in a way that made it boring for an adult to read. The main difference I felt was that the print is larger than an adult book, so I zipped through it pretty quickly. The main characters are 12-16, and they felt authentically that age to me. I remember being that age and having similar problems like, “My parents don’t understand me,” “I’m not sure where I fit in,” and “Other kids are better at things than I am”.

This book starts out with a tragedy, and most of the rest of the book is the emotional fallout of that tragedy, while also dealing with a life-or-death survival situation. I deeply empathized with one character’s lament that, “Bad things happen to good people and it’s not fair.” In 2020, adults and children dealt with circumstances beyond their control, and this book felt timely in that respect. These characters have to make choices about how they will let the bad things shape them, and their choices felt very believable. The one minor quibble I had with the writing was the overuse of the “Jedi ex-machina,” where a character would be thinking something over and an italicized quote from a mentor would pop into their heads at the right moment that expressed exactly the right sentiment. During the climax, this happens and it could have been very powerful, but it had been done so often by that point that I felt it lost some of its emotional resonance.

All in all, I thought the writing was very enjoyable, and a great example of battling complex themes in a way that is age-appropriate for the audience, but not shying away from the difficult stuff.

Justina Ireland is no stranger to writing in the Star Wars universe (she’s written two other middle grade books, Lando’s Luck and A Spark of Resistance) and it definitely shows here. This new world could have felt contrived. Instead, Ireland has infused it with enough touches that made me feel right at home. It’s clearly Star Wars from the very beginning. Several familiar alien species and planets are mentioned right away that ground the reader in the galaxy far, far away. Plus, the traditional big Star Wars themes of light vs. dark, the relationship between student and teacher, and choosing to be a hero when the world goes wrong are all present here as well. Her main characters–Vernestra the Jedi knight, Imri the Padawan, Avon the child scientist, and Honesty the diplomat’s son–all feel fully developed and three-dimensional. Even though it’s new people, places, and things, it feels instantly like the Star Wars we know and love. It’s a great feat and Ireland should be applauded for it.

But it’s also very, very different from anything we know. The Jedi are not the scrappy solo fighters from the original or sequel trilogies or the bloated bureaucracy on the verge of collapse from the prequel trilogy. In the High Republic, the Jedi are the resplendent keepers of the peace and general wisdom-keepers of the galaxy. They’re not just warriors. They are teachers, diplomats, and healers. They felt sort of like a galactic Red Cross–skilled and trained caregivers dispatched in times of need across the galaxy. The era’s central conflict is Emergences–a mysterious event where ships break apart in hyperspace, killing everyone on board, but also becoming lightspeed-fast shrapnel that can appear in regular space and blow things up at any time. It’s a terrifying, faceless threat that can’t be “fought” with weapons or might. Watching the Jedi respond to this danger with compassion and logic instead of lightsabers is enthralling. This was a really lovely facet of the Jedi identity to discover.

Since this is a middle grade book (and the Jedi are forbidden from romantic attachments) there’s no romance here. However, there are some really compelling friend and family connections. One character, Honesty Weft, loses his father and his grief is truly palpable throughout the book. He laments things he should have said and mundane things he took for granted (and will never experience again) and it’s really heartbreaking. His pain serves as a catalyst for a major event in the book and it was powerful to observe how our inner pain often fuels our outer behavior and the importance of handling our emotions before they overwhelm us.

Two of the children, Honesty and Avon, develop a deep friendship which starts out with them being wary of each other because they appear so different. They get to know each other and realize they are not so different, and that their differences complement each other. It felt true and earned and was a great “happy moment” in the midst of all of the peril.

Vernestra, the brand new Jedi knight, is a very believable combination of the famous Jedi inner peace and 16 year old feelings. Avon calls her “Vern”, a nickname she hates, and she tries to brush it off but it really bugs her. She’s practically saintly as a Jedi who has all the answers and is almost infuriatingly calm, cool, and collected, but minor details like the nickname issue make her relatable.

Avon Starros, the tween mad-scientist genius, is extremely likable. She’s constantly sneaking out and making trouble but she just wants to understand SCIENCE, dangit! A B-plot involves her successfully reprogramming of her nanny droid to allow the droid to self-determine, which is both funny and a little scary. The droid, J6, is similar to a lovechild of K-2SO and L3-37 and is always good for a joke to lighten the mood (Ireland wrote L3-37 in Lando’s Luck and her experience with plucky droids really shows here). Avon’s arc was the most static of the 4 main characters, but that’s because she was already the most awesome.

Imri the Jedi padawan and Honesty Weft the diplomat’s son were almost interchangeable. They’re both mourning a personal loss and trying to handle their anger. If I have any criticism, it’s that the boys here are far less interesting/fully fleshed out than the girls. But that’s hardly even a complaint since it’s usually girls who so often get short shrift and are reduced to stereotypes. The girls here do save the day and it’s a nice change of pace.

The Force is front and center. Nothing particularly new in terms of what it can do, which I think was a good decision that helps bring wary readers into the new space. There’s talk of the Jedi trials, but not a whole lot of information on how they happen or what they entail.

The big new thing, which is part mythical and part technological, is the Emergences. This ship-collapsing “event” which causes spaceships to turn into deadly lightspeed meteors is very mysterious. The seemingly random acts of destruction with no nameable foe is extremely mystical and equally scary. I look forward to learning more about them in subsequent offerings.

On the Whole, I really liked my first taste of this new era, and I will be back for more! I think this is a great entry point for anyone not completely sold on the High Republic idea, or even for someone who’s all in. Justina Ireland has crafted an excellent story that’s worth taking “a first step into a larger world.”

Join our host Marie-Claire Gould (@mariecgould) and co-host for this episode Hammie (@BalancedPadawan) to discuss and Speculate on Star Wars: Visions which...
Read more
Interview

Interview: Amy Richau ( Star Wars: I Love you. I Know)

Review: Star Wars: The High Republic – Light of the Jedi

Charles Soule is a good writer and has done a solid job introducing all the basics of the High Republic, and it is a good starting point for this new Star Wars transmedia project. Light of the Jedi also a masterclass of detailed worldbuilding. However, the heroes lack characterization and they seem, at times, brainwashed. Unless you have been craving the Kennedy’s Camelot and Superhero!Jedi, this novel might make you roll your eyes a little bit. That said, if you are in the market for full-metal villains and wholesome laser sword heroics, Light of the Jedi might be just your jam.
Read more