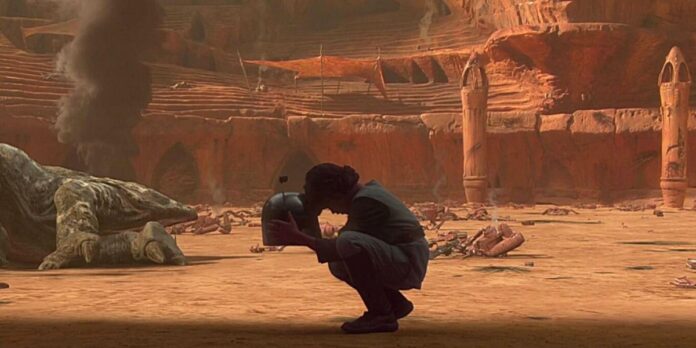 “Jango Fett’s head flew free of his shoulders and fell out of his helmet, to settle in the dirt.”

I first read this sentence from R.A. Salvatore’s novelization of Attack of the Clones during recess at my elementary school. Even now, the sting remains. I’d long been a fan of Boba Fett, the notorious bounty hunter of the OT and had reacted to Jango Fett’s prominent presence in AotC’s trailer and marketing with unrestrained glee. Once I found out who was playing Jango though, everything changed.

Jango Fett was to be portrayed by Maori actor, Temuera Morrison. His cloned son, Boba, played by fellow Maori Daniel Logan, was no longer just a faceless killer, but retroactively integral to Star Wars canon. I was shocked. The father-son duo immediately shot up the ranks of my list of favorite characters.

To give context, I am afakasi: half-white and half-Samoan. Samoa (split between the island country of the Independent State of Samoa and the US territory of American Samoa) occupies a small part of the Polynesian Triangle in the Pacific Ocean. I am immensely proud of my heritage but, as anyone who is “half” anything will tell you, I often feel removed from its cultural experience. Being part of the diaspora, born abroad (in this case, America), and unable to speak the language doesn’t help.

Pop culture, as we all know, is a unifying presence in our lives. Something that can transcend differences like age, gender, or language. Though representation has thankfully become a grander part of the conversation (with admittedly still a long way to go), at the time I thought nothing of it. I accepted my heroes as they were delivered, whether in the form of the entirely white cast of The Lord of the Rings: The Fellowship of the Ring, properties like the more diverse, but still limited Power Rangers, or even Star Wars itself which, despite its plethora of alien races, still only managed to have a single non-white speaking character in the entire original trilogy (“Why you slimy, double-crossing, no-good swindler!”).

Although these remain some of my all-time favorite pieces of media, I yearned to see someone that not only looked like me (being afakasi usually means some measure of racial ambiguity), but who was undeniably like me: Polynesian. I got that with the Fetts.

In Jango, I saw my dad who, though not a killer, was often stern and invested in a version of my future – collegiate athlete — that paralleled his own path and many other Samoans (tragically, I would become a writer). In young Boba, I saw myself, aspiring to make my father proud, wanting to be taken seriously; dedicated to a certain level of physical excellence achieved through training and perseverance.

My fervent projection and excitement for the film were hamstrung by Jango’s embarrassing death at the hands of resident buzzkill, Mace Windu. I read and reread the passage from the novelization, hoping I’d misunderstood. A month later, I sat down in a theatre to watch AotC, vibrating with excitement, but also dread at what was to come. Alas, the film was to be the same.

In the immediate aftermath, to my disappointment, representation for Polynesians in popular media did not continue with any real strength. Dwayne Johnson—also half-Samoan, though this fact is often confused by his having grown up in Hawaii—exploded as a new action star. Despite growing to eventually be the highest-earning actor multiple years running, his Samoanness did little to elevate our visibility on the world stage, and was only recently explicit in the 2019 film, Hobbs & Shaw.

He headed the very short list of elite Polynesian actors that formed in my mind, the second being Jango himself, Temuera Morrison (who co-starred with DJ in the heartening, yet nonetheless white-creative-led Moana), and Maori Cliff Curtis, who is famous for playing everything but Polynesians (his biggest role as one being in the aforementioned Hobbs & Shaw). Later additions to this list (now at a staggering five!) include the multitalented Maori filmmaker and future Star Wars luminary Taika Waititi (also the first writer on Moana) and Hawaiian Jason Momoa. The latter’s starring turn in the gonzo, aquatic blockbuster Aquaman was wonderful to see though I was disappointed that Temuera Morrison was cast as Arthur Curry’s human parent, when we could’ve had an Atlantis filled with gloriously tattooed Polynesians.

As you can tell, I think about this subject often, and though my deep love of Star Wars continues to this day, I smart at the mention of Boba Fett. Many beloved podcasters and YouTubers sigh at the mention of the bounty hunter, stating (with good reason) that he never really did anything in the films and that he is unworthy of surviving the Sarlacc Pit he fell into in Return of the Jedi. They even made a joke about it on Parks and Rec.

Unfortunately, my connection to the Fetts has been further complicated by how Mandalorian lore has been built out in subsequent years. It might have been wishful thinking, but I truly expected the Mandalorians of The Clone Wars and Rebels to be bronze-skinned giants, rather than the white-coded characters we got (save for Clan Wren.) That the only other characters originated by Polynesian actors in Star Wars are brainwashed clones, voiced (even incredibly so!) by white actor Dee Bradley Baker doing his best Temuera Morrison impression has always rankled me.

Beyond that, Jango’s own past has been muddled by a stolen-valor storyline that puts the veracity of his Mandalorian heritage into question, a subject now further complicated by The Mandalorian show itself, which not only added a new, post-RotJ genocide to mythologize and rarify them, but has explained Mandalorians are now no longer considered a race, but a Creed; it is not something you are, but something you can choose to become.

I understand that representation in a fictional setting is not the same as the real world, but it’s difficult to let go of the vicarious pride I remember feeling from my slight connection to the Fetts in my youth; one which presented a creative opportunity to give space and attention to a small, often ignored subset of the world’s populace.

So, what’s to be done? Rumor has it that Boba will appear in Season 2 of The Mandalorian, potentially played once more by Temuera Morrison, in a show that previously featured and had a few episodes directed by Taika Waititi (2 of the 5!). I’m excited at the possibility but filled with a dread similar to the one I felt before AotC. I don’t want another monosyllabic badass — we have Din Djarin for that — or a depiction like Boba’s often-problematic, sociopathic representations in both extended Canon and Legends (ho-hum fundamentalist Jaster Mereel of early depictions springs to mind.)

Why not explore the theme of identity? The complex life of a person whose father did not seek a relationship to have a child to continue his legacy, but instead asked for an exact replica of himself; an extension of his ego. A person whose following in his father’s footsteps, steeping his life in violence, led him to ruin. Yet impossibly, he survived and returns now with a fresh perspective.

Despite the eye-rolling and the dismissals, Boba Fett, somehow, remains one of the most popular Star Wars characters in existence. Fandom and commerce seem to demand the continuation of his story, and I see now as the perfect time to do that, with perhaps the most challenging choice being to continue in the grand tradition of Star Wars: a tale of redemption. Maybe This is the Way to make Boba Fett the interesting, complex character people yearn for — ideally with Polynesian creatives at the helm and under the helmet.

It’s an experience I crave. When I sat in the theatre a few years ago watching Marvel’s Black Panther, I was so filled with happiness: at what I was witnessing, yes, but more so from the palpable energy of the joyous Black audience members in the room, getting to see themselves represented so loudly, with such power and grace. I yearned for that experience with a Polynesian character, and later lamented that we as a collective have no pop culture artifact upon which to draw with decades of material or relevance.

Then I thought, perhaps not in this galaxy, but what about another…