Home Articles How Different Jedi See the Force in Star Wars: The High Republic
ArticlesThe Way of the Force

How Different Jedi See the Force in Star Wars: The High Republic

The authors of Star Wars: The High Republic disclosed in a New York Comic Con Panel how their new Jedi perceive the Force, from a wonderful orchestra to a massive tree. 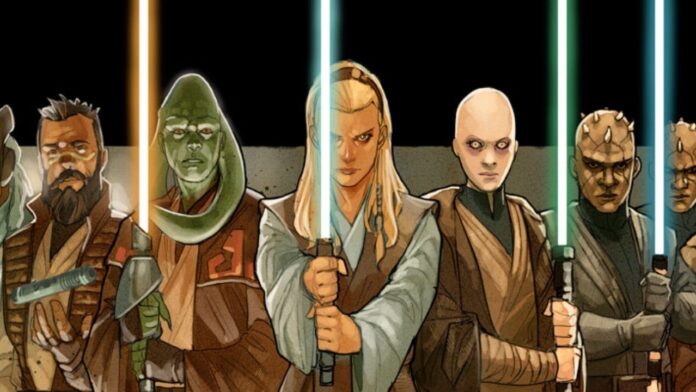 Star Wars Publishing got its own panel at New York Comic Con, and the authors writing the new transmedia series Star Wars: The High Republic shared how some of their Jedi characters perceive the Force.

“We have really tried to lean into the idea that every Jedi has their own connection to the Force and that allows them to experience it in their own way, which has really been great for storytelling,” said Charles Soule, the author of Star Wars: The High Republic – Light of the Jedi. “One of the things that’s cool with dealing with so many Jedi is that we don’t get that one perception of what the Force looks like, but for each of them it’s a very personal connection.”

“Basically, the idea is that the Force is very small and personal, but it’s also very large and immense, and it encompasses all things. The fact that we all could come up with different metaphors for it speaks to how powerful the idea of the Force really is. It is small, going to big, with all these connections. It’s pretty great.”

“You can kind of foreshadow some character arcs with it,” Ireland added, hinting at the High Republic stories to come.

The Force is Music

For Avar Kriss, a Jedi Knight created by Charles Soule for Light of the Jedi, the Force is like a symphony and each individual Jedi sounds like a different instrument.

“She perceives the Force as basically music. She calls it ‘The Song of the Force.’ “And so for her, all the different Jedi have their own songs and instruments and it all comes together into this great symphony of dissonance and assonance, and all these beautiful things that she’s able to perceive – the way the Force connects these things as music.”

The Force is a Tree

“But through the manuscript, we see that other Jedi also have their own way of relating to the Force, because the Force is a living energy field that binds and connects all things, as Yoda described it. But that’s Yoda’s perception of it,” added Soule.

The Force is a Spiderweb

For padawan Reath Silas, created by Claudia Gray for Into the Dark, the Force is much more subtle – he has to exert himself to perceive its delicate patterns at times, and this makes him see it more like a spiderweb – almost invisible in some spots, but really strong.

“He’s not as strong in the Force as many Jedi are. He made the cut, but he has to work a little harder than some do. If he were picturing it, the thing that comes to mind for me is a spiderweb; in some ways it’s very strong, and in some ways it’s very delicate and it can be difficult to see. For him, that’s something that he really has to search out, but he’s very dedicated to finding the patterns.”

The Force is a Tapestry

For Cavan Scott’s Keeve Trennis, the Force is a gigantic living tapestry where different threads help create the entire picture.

“Keeve sees the Force as a tapestry, this massive work of art that spreads across the Universe, full of different threads, with the wool and the waft. The thing that’s key is that she still has to find her own thread in that, so she can feel overwhelmed by stepping back and seeing the picture and not seeing how she fits into it.”

The Force is a Mountain

Daniel José Older’s Lula from Star Wars: The High Republic Adventures has a much more competitive vision of the Force.

“She’s a padawan, she’s learning so much about the Force. And there’s the deep kind of philosophical side of the Force, and then there’s the training and the combat at all the other levels. What she knows, is she wants to be the best, she wants to excel in all the ways and she loves the Jedi Order. So she sees it as a mountaintop, somewhere to get to, to get better and better at.”

“What’s cool about telling these stories is that it’s an ever-evolving thing,” added Older. “Her relationship to the Force and to her fellow padawans and Force users is growing and changing as she goes on different adventures, so we get to see that evolve with her as she grows. “

The Force is the Sea

Justina Ireland, who is writing The High Republic: A Test of Courage has another metaphor set in the natural world.

“For Vernestra, she sees herself as a small stream, a stream that flows into a river, that flows into the sea, and that’s what the Force is for her. A sea that has all these different waters coming into it.”

Most of these metaphors have been used by other Star Wars creators to refer to the Force. Yoda has been regularly associated with plants and trees, up to his last appearance in The Last Jedi, when he burned the sacred tree.

Music was how John Williams perceived the Force, and each character of the movies had a specific instrument associated with their theme (heavy percussion for Vader, the celesta for Rey…). Water in all its states has been a visual representation of the Force across all Star Wars media, and its absence a sign of spiritual drought (Tatooine) or violent death (Mustafar.)

Others are intriguing: Palpatine has been associated with spiders and ambition, as well as with a love for art in all its forms (including music.) While it’s too early to make assumptions about the fate of these Jedi of the High Republic, their visions of the Force are very intriguing and a very good way to approach the mythos of Star Wars from very different perspectives.