Home Articles Dealing with the past, balance, and belonging: the common themes between Cobra...
Articles

Dealing with the past, balance, and belonging: the common themes between Cobra Kai and Star Wars 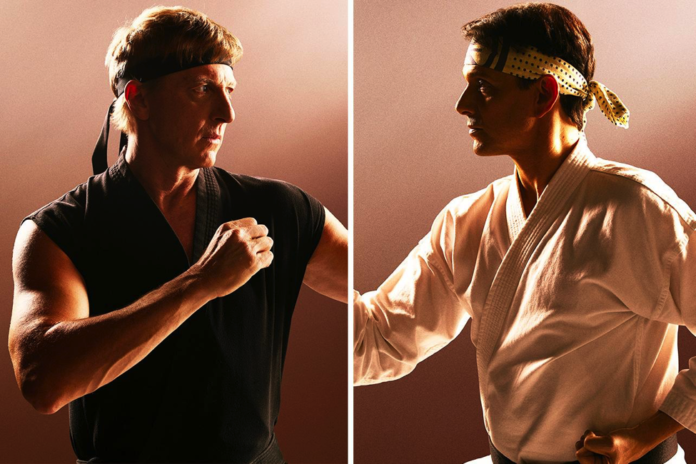 Revisiting old stories risks falling into the nostalgia trap of telling the same tale all over again. The series Cobra Kai, a sequel to The Karate Kid, avoids this by building upon the story we all know, but with a refreshing take and different perspectives. With its two first seasons recently relaunched on Netflix, there are many parallels between Cobra Kai and Star Wars.

The belonging you seek

Maz Kanata said it best in The Force Awakens, “The belonging you seek is not behind you. It is ahead.” She was talking about rising above life’s circunstances and finding a place to belong. Cobra Kai shows this by expanding Johnny Lawrence’s background: we find out that both Johnny and Daniel were missing a father in their lives and then found a sensei who filled that gap. Years later, they both become a sensei and a father figure for Miguel and Robby. In Star Wars, we see this a lot with orphan characters like Ezra and Rey who are looking for guidance and become part of something greater than themselves. We also have cases of non-Force users such as Jyn Erso, Cassian Andor, and Sabine Wren finding belonging elsewhere.

“Darkness rises and light to meet it.”

The search for belonging takes the student and their master or sensei through an important lesson about balance. We see that for Johnny, having the prospect of teaching karate to someone works as a catalyst to start his dojo and bring Cobra Kai back to the valley, causing Daniel LaRusso to open Miyagi-do to counterbalance their influence. The end of Season 1 leaves the door open to bring Miyagi-do as a counterweight to the increasing power Cobra Kai is holding in the school, a similar gesture to when the Resistance is looking for Luke Skywalker to come back and bring balance to the Force.

We also see the balance as a lesson used by Daniel on his two first Miyagi-do students to fight in coordination, something mirrored in The Last Jedi when Rey and Kylo Ren team up against the Praetorian Guards, working together in a synchronized way and balancing each other to overpower their enemies.

Johnny also accepts students in his dojo that were bullied in school like Miguel, but unfortunately, some of them repeat the pattern of becoming bullies, showing how balance is hard to maintain. As we have learned in Star Wars, the dark side is easier, quicker, and more seductive. A bullied person becoming the bully is seen when Obi-Wan tells Anakin in Revenge of the Sith, “You became the very thing you swore to destroy.” As Samantha LaRusso said in Season 2, “Everyone has a sob story. That doesn’t give you the right to become a bully”.

Your focus determines your reality

We meet an older Daniel as a winner in life. He has achieved everything that Johnny has not: a career, a family, and –worst of all– he built his business reputation upon that champion title at the All-Valley Tournament from 1984. Upon hearing about the reopening of Cobra Kai by his former foe, his life becomes unbalanced as the past comes back to his reality. It is as if David had defeated Goliath only to find the giant back in his life long after becoming king.

When Daniel’s obsession over trying to stop Cobra Kai and his former foe starts affecting them, Daniel’s wife Amanda cautions him, “Sometimes when you focus on one thing, you lose focus of everything else that matters,” calling to mind the words of Master Qui-Gon from The Phantom Menace.

“Pass on what you have learned. The greatest teacher, failure is.”

Life is made of changes and we see Johnny at this point where he is at the bottom and uses Cobra Kai as a way to get his life back on track. But we see from the beginning where that philosophy took him: his life was filled with failures.

Johnny starts teaching martial arts as he learned, but as he goes through this journey, he realizes that “Strike first, strike hard, no mercy” is not accurate. It is just words that he painted on the wall. Life is not so black and white.

“We are what they grow beyond. That is the true burden of all masters.”

We see from Johnny’s perspective how things were in the first movie, when he had broken up with Ali and a new challenger entered the scene, Daniel LaRusso. It is like what we saw in The Last Jedi with the fall of Luke’s Jedi Academy. We witness the event from both Luke and Ben Solo’s perspectives and at the end, we see how it really happened.

Some might say this was an attempt to justify and vindicate the former bully, but life can be interpreted differently from a certain point of view. Perhaps if Johnny had a sensei like Miyagi who had guided him instead of Kreese who manipulated him, things may have been different.

Also, as vilified as the Part III of the Karate Kid saga was, we can see how Daniel falls in the dark and joins Cobra Kai to keep training. That is why he can accept and embrace those former Cobra Kai students looking to join Miyagi-do. This parallels characters in Star Wars like Ben Solo, Anakin Skywalker, Asajj Ventress, and Darth Maul who either by circumstances, bad choices or sheer manipulation join the dark side.

It is a fight dynamic seen across popular media. The antagonist, usually in black, gets the upper hand. Their opponent is at their lowest, in pain and struggling, somehow rises up, surprises their opponent, and defeats them.

I could be referencing either of these two fights:

In Star Wars, the closest character to Johnny Lawrence is Maul. The once-apt pupil of Darth Sidious who had even defeated Qui Gon Jinn is defeated by Obi-wan and faces the shadow of failure throughout his whole life. No matter how high he rises in the criminal underworld, he remains obsessed with the padawan that bested him.

For Johnny Lawrence, Cobra Kai was what worked for him when he was successful in life — or what seemed to work. By opening his dojo, the cycle starts again, repeating the structural relationship of master and apprentice, of sensei and student.

However, Johnny, unlike Maul, seems to start a journey of discovery and coming to terms with his past. When Daniel goes to his dojo after Miyagi-do is attacked, he refuses to give the first punch. He even tells him, “I’m going to be the better man”. Through the two seasons, we see him struggle with the past and the legacy of Cobra Kai, but also with trying to be better.

Let the past die

In the Season 2 finale of Cobra Kai, we can see balance is hard to reach and that we do not move in absolutes: both a Cobra Kai student can act with mercy and a Miyagi-do apprentice can act recklessly without thinking about the consequences.

We see both Johnny and Daniel facing difficulties and the loss of balance. Kreese reveals himself as the master manipulator of the Karate Kid saga, faking his death more than once (like Palpatine, he somehow returned too) and betraying his former student to take his dojo away.

Maul is an example of what Johnny could become if he goes deeper down the path of darkness and obsession with revenge. We know where that took Maul: he found his way to Kenobi on Tatooine, where Kenobi gave Maul a merciful death which put him finally at peace. The old Sith apprentice died in the arms of his greatest opponent. What will the future bring for Johnny?

Looking to the past and to the way things were can be dangerous if we do not acknowledge our demons and move forward. The tragedy of Maul is a terrifying picture of what could happen if someone is not willing to let go of old grudges.

Will Johnny and Daniel set their differences aside to fight against the bad influence of Cobra Kai once and for all, similar to the way Maul, Ahsoka, Kanan and Ezra faced a common enemy on Malachor?

Will other characters from their past come and create more conflict? Will they be able to find a middle ground and aim for balance? We shall see what Season 3 holds for them.