THE POWER OF APOLOGY 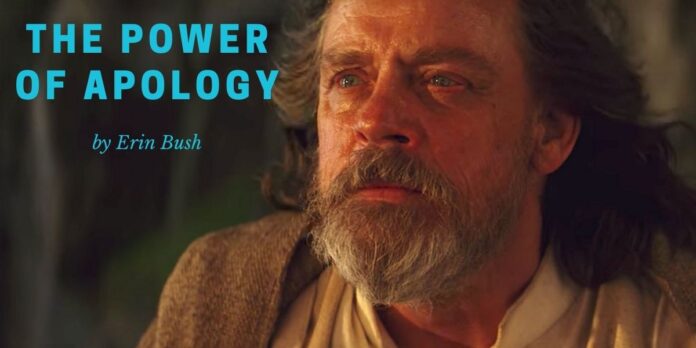 It is only when Yoda reminds Luke that “the greatest teacher, failure is,” that Luke is able to see his own shortcomings in his past treatment and training of the young Ben Solo. He realizes that if there is any hope of Ben turning back to the Light, it must start by repairing the wound that influenced him to turn toward the Dark. However, Luke cannot return to the moment at which he saw the Darkness in Ben and for a split second thought he should rid the Galaxy of it. He cannot remove the impact of those actions, and he does not try to. He does not even attempt to convince Kylo of his need to turn to the Light. He simply confronts him with truth.

They meet on the salt fields of Crait. Salt carries a variety of meanings in culture and mythology. Many cultures believe that salt wards off evil. Salt is also seen as a purification agent in many religions; Greek’s used it in purification ceremonies, Jewish temple offerings often included salt as a way of demonstrating purity, but also permanence of the covenant made between man and God. The origin of the word “salvation” is also connected to the sealing of covenants in the Old and New Testament by, you guessed it, salt. The Shinto religion uses salt to purify an area in elaborate rituals.  It is not an accident that there is time spent before Luke and Kylo’s confrontation to point out the field of war is literally made of salt. Something purifying, and getting rid of evil is about to occur, unbeknownst to any of the participants.

Luke meets Kylo on this field “physically” but he is also meeting Kylo where he is at emotionally. Luke appears perhaps how he looked the night they last saw each other: younger, with cropped hair, and a saber in his hand.

Kylo’s fury and anger clouds his judgment in that he does not realize Luke lacks his own green saber. Instead, Luke wields the saber of his father, the one Kylo and Rey recently broke.  We know from Rian Johnson, director of The Last Jedi, that he gave Luke this saber to have a “maximum effect on Kylo, . . . the lightsaber that Kylo screamed at Rey, “that’s mine, that belongs to me!”

Kylo does not realize Luke holds the saber they recently destroyed, and given the timing, he likely does not even know they did break it, as Rey escapes with the pieces while he is knocked out. He is rife with emotion from Rey’s rejection and an emotional break-up with her, which Luke uses. Kylo see’s the saber that he believes should be his, in the hands of the man who betrayed him, and immediately must destroy him out of revenge. Luke sees this, but does not seek to manipulate him. He simply uses Kylo’s fragile emotional state almost against him, hoping to encourage deeper realizations about his own actions. This is evident in their short conversation.

Kylo: “Did you come back to say you forgive me? To save my soul?”

Forgiveness is a tricky thing. It must be offered and accepted by both sides in order to be fully healing. The old adage that you should forgive to heal yourself is a nice thought, but often misses the point. If it is only offered, and not accepted, forgiveness has not happened. However, acceptance has on the part of the person apologizing, but the victim in the situation might not be ready to receive the offer of peace. Luke knows this. He knows that Kylo may not be ready to receive forgiveness, so he stops short of offering it. He simply apologizes.

The human brain is quite effective at finding excuses and justifying our own actions. Because of this, we often must learn to apologize. In my line of work, I teach people to apologize to themselves and other’s all the time and have found a few things that are helpful for the desired healing impact. Psychology Today outlines what a good apology must contain to be a genuine act of healing:

1) You understand what you did,

2) You know why it was hurtful/wrong/inappropriate,

3) You do not offer explanations or justifications of the action to defend the poor behavior,

4) You take personal responsibility such as “I’m sorry I…” instead of “I’m sorry, you…”.

Luke’s six-word statement demonstrates the perfect example of an ideal apology. He expresses understanding that what he did was wrong, and admits his failure. He knows he hurt Ben, influencing his choice to turn to the Dark. Luke does not justify his past actions, which would be easy to do given Luke’s ties to the Dark. On Crait, he finally takes personal responsibly for his actions, speaking words that carry so much meaning behind them. The perfect apology. The line gives me chills every time I interact with it.

Despite this, Kylo is not ready to receive the offered forgiveness at present, and is uncomfortable with the responsibility. Luke leaves the follow-up to him, and Kylo lashes out with physical aggression.

Luke refuses to argue, or attempt to point out his errors. He simply informs Kylo that he might be missing information.

“Every word of what you just said was wrong. The Rebellion is reborn today. The war is just beginning. And I will not be the last Jedi.”

This is an act of love, hoping to direct Kylo to consider the impact of his actions and emotions on not only himself, but the Galaxy as a whole.

With his apology, Luke metaphorically offers Kylo the salve to heal his wounds. He offers the needed elixir, and leaves it at Kylo’s side to pick up when he is ready. Kylo immediately thinks of Rey, a person who Luke has not brought up in this conversation and reports he will destroy her. Luke knows this is not true, and continues,

“No. Strike me down in anger, and I will always be with you. Just like your father.”

Luke refuses to argue, allowing Kylo to sit with the apology, not asking him to do anything with it immediately. Kylo gets angrier, discovers that his uncle is an illusion, and very likely feels Luke pass into the Force.

Kylo’s reaction appears to be directed toward the Resistance, but most of it emanates from the loss of his uncle and teacher. In the span of a week at most, based on what time information we get in the films and novelizations, he has lost the two most important father figures present in his life. The emotions of breaking up with Rey, killing his father, and Luke passing, all come out in this moment of anger. What does Kylo do with it?

We immediately see a change in his demeanor.

Kylo is still every bit the Supreme Leader, but after this confrontation he becomes quieter, softer, and more introspective. This indicates that he is unsure how to manage the apology handed to him, visually represented by his handling of the dice as they disappear. These objects present him with one final pull to the light, a quasi-physical representation of his father and his uncle. Personally, I feel that it was Luke who left the dice, as his Force projection handed them the Leia as well. And, instead of regressing to a toddler-like temper tantrum like he did in The Force Awakens, Kylo pauses and thinks — lmost as if the dice finally drove home Luke’s point.

In this action, Luke leaves behind one message for him: “You are not this person, you can do better. Those in the past have hurt you, and are sorry. You do not have to continue living like this.” Luke’s apology does not heal Kylo, nor does it remove his pain or consequences of his actions. What it does, is get him thinking. In this moment, as Kylo cradles the dice, he is still not fully himself, but he has begun the path toward becoming Ben again.

Luke’s apology changes Kylo’s mood drastically. A statement of admittance of failure, an acknowledgement of wrong doing, and a plea for a turn back for the one who was hurt, gets him thinking. Rey’s second refusal solidifies his anger, but also likely encourages contemplation of where he goes from here.

We do not see him fully come home until Rey affirms the second time she wanted Ben Solo’s hand in The Rise of Skywalker, at which point, he fully acknowledges the failures of his past, and is willing to move beyond them. He takes the apology of Luke, and the memory of his father with him, as he is finally able to run home to Rey. The apology is finally accepted, and Ben Solo lives once more.

In this is the lesson: even the darkest souls can come home thanks to the power of a simple apology.

Erin Bush
Erin is a relatively new Star Wars fan having only joined in July 2019. Since then she enjoys all aspects of mythology, spirituality, and mental health present in the galaxy. She assumes her history degree and counseling masters has some influence on that. Find her reading her never ending of "catch up" books and comics, binge watching The Last Jedi, working on building her LEGO BB8, and somehow finding time to work on her fanfics.