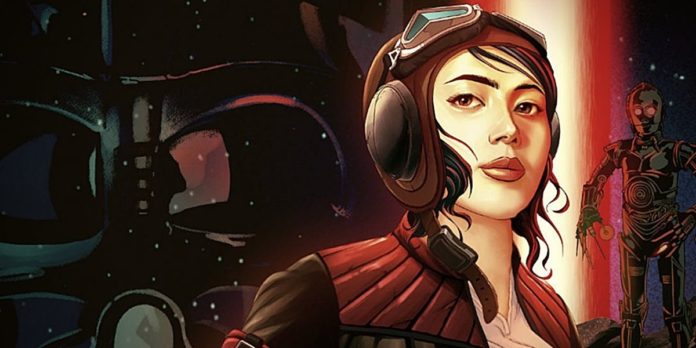 Doctor Aphra: An Audiobook Original is pure joy from beginning to end. The cast is brilliant, the sound design immersive – the gentle twinkling beeps of Aphra’s Archangel would work as Galactic ASMR – and the pacing and writing will keep you hooked to your headphones.

Warning: From this point on, the review contains spoilers for Doctor Aphra: An Audiobook Original.

Reprising Aphra’s first appearance in the Darth Vader comics in between A New Hope and The Empire Strikes Back, the audio novel takes a deep dive into her personal history and the turbulent early years of the Empire. Aphra’s narration is not exactly unreliable, but it’s coloured by her terrible family life – her detached archeologist dad, who took her on trips not because he wanted to spend time with her, but because she was small and useful, and her protective but static mom, killed by raiders on a dying Forest Planet. It’s no wonder that Aphra’s guiding motto is to rely only on herself, understandable that she pushes away from Sana Starros, her first love, and unsurprising that she gets attached to her abusive new boss, Darth Vader himself.

Limited by the long arm of the Emperor and shadowed by a smart Imperial Inspector, Vader has to rely on Aphra to carry out his own quest for independence and closure: scout out a droid factory to create his own army, locate the last person that spoke with Padmé Amidala, and find out where “the Skywalker boy” is hiding. While Aphra first takes these commissions at face value, she soon starts to work double duty to gain any advantage to manipulate Vader – although it’s painfully obvious that if she ever tried to manipulate him, she would end up skewered by a lightsaber.

Most of the people listening to this novel will already know the answer to every mystery, but that only hardens the emotional punch. One of the most poignant scenes, ripped from the comics, puts Aphra and Vader together on the ruins of the Lars’s Tatooine moisture farm– fans will know that Vader is finally putting the pieces of the Luke puzzle together, but Aphra doesn’t know anything more than her boss is obsessed with a bland farmer kid. She’s smart, though – she picks up that Vader’s murder of the Larses pushed Luke into the Rebel X-Wing that would blow up the Death Star, and she shares that thought with Vader as he stares at the collapsed home of his own mother and son.

But, as Aphra uncovers more and more heartwrenching secrets, she loses part of her humanity. Chelli was morally grey until her confrontation with Padmé’s mortician. From that point on, she joins the ranks of Jango Fett, General Hux, and Count Dooku. It also becomes increasingly likely that she will die by the end of the book; Star Wars has gained a reputation for killing its questionable characters.

Aphra had been expecting to get killed since the moment she started working for Vader, and she wanted to be ready if her nightmare scenario happened – ready to die, leaving at least her voice behind, and ready to cheat death, literally or metaphorically. In the end, Aphra realizes that she wants to live – after spending most of the novel running away from any mother figure that tried to keep her alive. And Aphra’s way back to the land of the living is her guile and the love that is left in her heart – she’s able to pull the scoundrel’s version of a General Leia Miracle Flight in The Last Jedi

The story is told in the form of a log, with Aphra constantly edits, rewinds and rewrites. It’s only at the very end that we understand who she was talking to – it wasn’t the Archangel, or herself, but to her first love, Sana Starros, whose mere presence leaves her breathless time and time again.

Doctor Aphra: An Audiobook Original is bursting with parallels with the prequels and the sequels. There’s the Tatooine scene, the gritty, heartbreaking and yet hopeful shadow of The Rise of Skywalker’s desert saccharose – but we also get to hear Padmé last words of worry, and to see Vader’s desperation looking for his child, the opposite version of Han and Ben’s relationship.

Aphra’s trajectory is a reflection of Anakin’s – dead mother, desert planet, oblivious parental figures, ambition and talent beyond her years and a knack for breaking the rules within rigid structures – no wonder Chelli and Darth get on relatively well with each other. And if you were looking for cool parallels, even Chewbacca, C-3PO and R2-D2 get to see their shadow-selves in Krssantan, Triple-Zero and BT-1… without robbing either character of their unique personality and journey.

But what about the voice acting? Emily Woo Zeller’s voice is pure magic, hilarious and full of denial, heartbreaking and impatient. Zeller carries the weight of the novel, and brings Aphra to life like nobody could. The rest of the cast is excellent, with a special mention to Sean Kenin, who plays Triple Zero, Aphra’s droid companion specialized in protocol and torture, and Utani Xane, who aced his brief scene as Han Solo.

If you only pick up one Star Wars book this year, make it this one. It has all the flavor of the vintage radio dramas, Kuhn’s sophistication, humor and sensibility and the layers upon layers of meaning that only forty years of Star Wars can bring. It also gets better each time that you listen to it, the true mark of greatness.

Dispatches from the Holonet: News Roundup 10/9/20

Welcome back, everyone! Hope you are having an excellent October so far! I've been enjoying the new shot of Adam Driver and...
Read more
Review

Join our host Marie-Claire Gould (@mariecgould) and co-host for this episode Missy (@Fangirling_0nly / https://www.tumblr.com/allgirlsareprincesses) in our Segment the Power...
Read more

Andor Declassified: Episode 10 One Way Out