A remix of the greatest hits that leaves you wishing for more from your favorite characters. 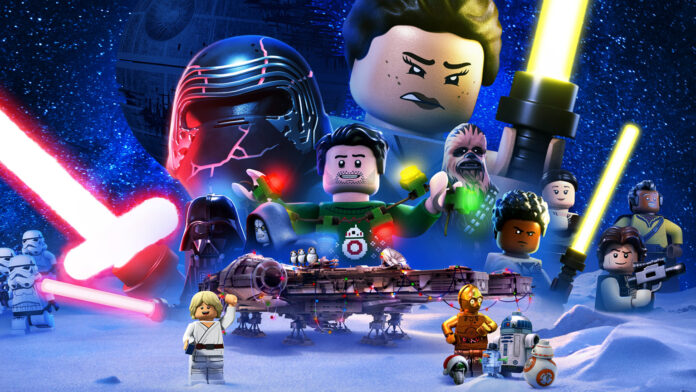 The LEGO Star Wars Holiday Special is our first real content after The Rise of Skywalker, but it probably won’t leave sequel trilogy fans very satisfied. The concept of Rey traveling through time provides opportunity for humorous looks at some of the iconic moments in Star Wars. It has something for every Star Wars fan to point and say “oh I remember that”, but is a remix of the greatest hits all Star Wars is now?

The story begins with Rey training Finn which is adorable. She begins doubting if she’s doing a good job and travels through space and time to find answers. Finn, Poe, and Rose stay on the Falcon to get ready for Chewie’s family to visit and the Life Day party. On her journey, Rey learns that the best way she can help Finn and all her friends is just by being there for them when they need her.

The remix scenes from the past are done well. They’re funny and include a variety whether it’s Luke and Yoda on Dagobah from The Empire Strikes Back, Obi-Wan and Qui-Gon as well as podracing with young Anakin from The Phantom Menace, the Mustafar fight from Revenge of the Sith, and even a cameo with Din Djarin and Baby Yoda from The Mandalorian.

However, those examples probably make clear what’s missing from the nostalgic past—female characters. There are two shots of Leia where she doesn’t speak and only a reference to Padme. There’s not even an Ahsoka moment thrown in even though we’re jumping through all of canon. Rey is a fan girl gushing over past male characters, but I’m sure she would be excited to see young Leia as well. In the present time, Rose was supposed to have a “prominent role” but the only increase in her screen time from The Rise of Skywalker is because she’s with the main gang.

This isn’t just a question of female representation since Rey is our main character, but as a sequel trilogy fan, it leaves me asking again, “who is Star Wars for?” I know this is a non-canon Special for kids, but if these are the most important moments to cherry pick will it always be this way? The Clones and a cut in half Darth Maul get joke moments so it can’t help but feel like a studio-mandated list instead of an organic look at ALL of Star Wars.

While Rey is traveling through the different time periods, she inevitably jumps to Return of the Jedi and Emperor Palpatine’s throne room. The jokes between Palpatine and Vader are great and the moment Palpatine realizes that Rey has a new kind of power he wants it. This launches us into the dark side plot. I loved that even though we have two Vaders, two Luke Skywalkers, and Rey and Kylo fighting each other, the story still resolves the same way, with Vader throwing Palpatine down a reactor shaft. It’s cute and fun.

Ben Solo or “Supreme Leader Kylo Ren to you”

Ben Solo fans have trepidly been waiting for his return, and unfortunately, we’ll still have to keep waiting. Rey meets Supreme Leader Kylo Ren from The Rise of Skywalker, and he has some hilarious moments with Hux and with Palpatine and Vader. Unfortunately, we’re left with the same longing Rey has, to see Ben Solo again. The good thing is that the status quo hasn’t changed and although, it hurts to see dark side Kylo again and again, a future storyteller can still pick up where we left off.

The lesson Rey learns about being there for Finn and the rest of her friends is a good one. It does match where we leave her as a character in The Rise of Skywalker and I’m always happy to spend more time with her. Using other masters and apprentices to show her that is a good narrative choice and hopefully in her next adventure, she’ll trust in herself and her friends.

The concept of traveling through space and time via different portals similar to the World Between Worlds is great, and Ben Solo fans will be excited for possible future storytelling to bring him back in a similar way. The end result, however, is that characters are frozen in time. LEGO Star Wars isn’t canon and is just meant to be a fun romp, but until Episode X inevitably happens, it can’t help but feel like the story is stagnant. We can safely explore these moments, but can’t risk much more.

This Holiday Season is Special, we celebrate The Star Wars Holiday Special with a Special of our own. Join Marie-Claire Gould (@mariecgould), and co-hosts...
Read more