Home Articles From a Child's Point of View: A 4 Year Old's Review of...
Articles

From a Child’s Point of View: A 4 Year Old’s Review of The LEGO Star Wars Holiday Special 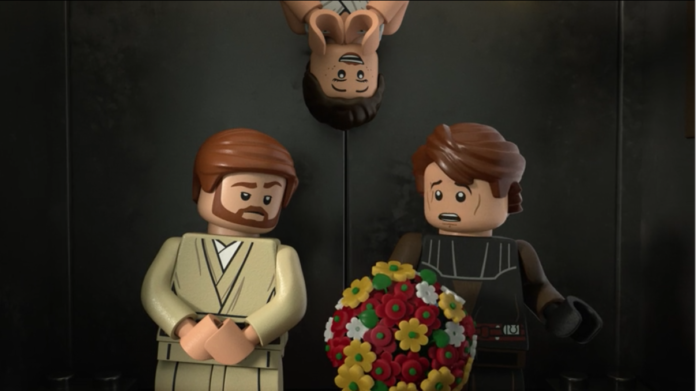 Note:  Hello everyone! My 4 year old is not a great typer, so this has been dictated to me by him. He has not seen any Star Wars movies, but he has seen all of the LEGO Star Wars cartoons. His review is in the form of the observations he made during the show, which are more or less linear. If you are looking for a complete and thoughtful analysis of this special, may I suggest one not written by a 4 year old? If you are looking to remember how happy Star Wars made you when you were a kid, I daresay you have come to the right place. We wish you a Happy Life Day, from our family to yours—Laura Duncombe

Now Finn and Rey are playing with a ball that looks like a planet, so I call it a planet ball. Finn is making a big mess! And he also broke the planet ball. This made me sad because breaking toys is very sad. But Rey fixed the planet ball! Yay!

Rey and Ball-Ball (Mom says his name is BB8 but I call him Ball-Ball, because he looks like a ball) fly to another planet and all of her friends stay on the Falcon. On the new planet, Rey is in the snow but she is not wearing a coat. Mom makes me wear a coat when I go outside, even if it’s not that cold. Rey’s mom should make her wear a coat. (Mom looks very sad when I say this but I don’t know why.)

Rey finds a magic thingy that lets her go through space without flying in an x-wing! I like x-wings better but Rey is happy. She goes to a jungle planet and she falls in the water! That was very funny and it made me laugh a lot.

Back at the Falcon, Poe has Ball-Ball on his sweater. I like that sweater. I ask mom if I can have a sweater like that and she says we’ll see. That means no in grown-up talk.

In the cave on the snow planet, Rey is sad. I think she needs some help. I hope the Force will help her!

Wow! The Force DOES help her! And there are X-WINGS AGAIN! Lots of them!! I don’t know where they are flying. Maybe they are flying to the North Pole? Maybe Santa needs help with his sleigh so he called the X-wings. If I was Santa Claus I would definitely have X-wings pull my sleigh.

This movie jumps around a lot. Back at the Falcon. Chewie is stuck in the Christmas tree, which is funny. I like people being stuck inside of things almost as much as I like people falling into water.

We are back to Rey and now DARTH VADER IS IN THIS MOVIE! Darth Vader is my favorite Star Wars character. When Mom asks what I like about him, I can’t explain it. He’s just my favorite.

At the Falcon party, I see two Chewies! Mom says that the other Chewies are his family. I’m glad Chewie has a family so he doesn’t get lonely.

Rey goes to a different planet and there are some people fighting over a big fire. Fire is very dangerous and I should never touch it! I hope that those people don’t fall into the fire. That would not be funny, like falling into water.

Rey is on another different planet, and for one second Baby Yoda is in this movie! I like baby Yoda a lot. He is on our cereal box and also Mom’s hand sanitizer bottle. My little brother was Baby Yoda for Halloween. I was Poe Dameron because I like X-wings so much (and Mom said that the Darth Vader mask was too scary for me, even though I don’t think that it was.)

Now there are lots and lots of people, and they are all fighting somewhere and it is very dark. I think they need a nightlight. My nightlight has Darth Vader on it.

Luke is drinking a juice box. I want a juice box! Mom says I can have one since I am being so good talking to her about this movie.

After I get my juice box, I come back and they are still fighting! There is lots and lots of fighting in this movie! I like it.

At the Falcon party, lots of new people come over. My mom is happy but I don’t know who most of them are. There is a big blue elephant and I like him. Now Finn is singing Jingle Bells but it sounds really weird. Everyone is singing with him–they all know the weird Jingle Bells. I don’t like it.

The bad guys are hanging out. Kylo Ren is spinning around in a chair, and that is funny. Not as funny as falling into water but it is still funny. One time in spun around in Mom’s office chair for too long and I almost barfed. That was not funny.

There is a lot of stuff at the end that was kind of boring. I played with my x-wing toy for a while and I missed a little bit of the movie. At the very end, there’s a weird stormtrooper in a purple outfit and a gold helmet. The stormtrooper kisses Poe under a flower and my mom had to put a quarter in the swear jar.

That was so fun! Can we watch it again? Maybe we can just watch the parts with x-wings and people falling and spinning. Happy Life Day everyone!