Review: Star Wars: The High Republic – Light of the Jedi 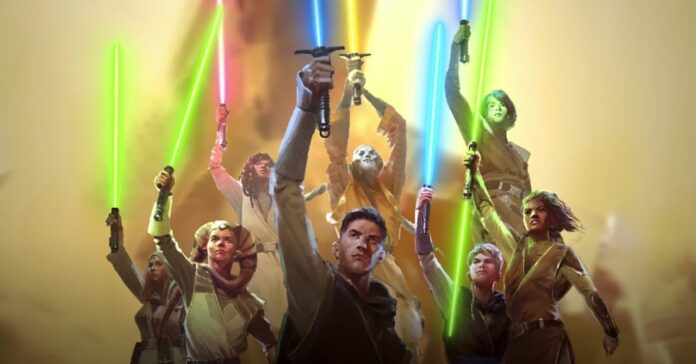 Light of the Jedi by Charles Soule is one of the novels that inaugurate the much-anticipated Project Luminous, a series of adventures set during the High Republic that follow a diverse group of Jedi in the Outer Rim, linked by an overarching plot spanning many years.

Light of the Jedi is the opening salve, introducing the so-called “Golden Era of the Republic” with a literal bang – a massive accident within a hyperspace lane that destroys the colony vessel Legacy Run and disrupts traffic across the entire Galaxy. At the same time, an opportunistic armada of space raiders, the Nihil, try to profiteer from the resulting chaos on the eve of the inauguration of Starlight Beacon, a shining communications relay that represents the Republic in the Outer Rim.

From a technical standpoint, Light of the Jedi is impressive. Charles Soule is a diligent soul who perfectly set the stage to enter the High Republic. He succeeded, weaving info-dumps within exciting space battles and introducing a massive cast of characters. The painstaking, detailed worldbuilding is a treat; we get to see how bacta was created, the basic economic system of the Republic is finally (vaguely) explained, and the descriptions of the vintage spaceships are delightful. There are even a few winks to fans of the prequels and sequels, with that Naboo-Gungan-San Tekka connections. This book will yield juicy trivia morsels for years.

On the other hand, the dozens of characters – and the fact that many of them don’t survive the chapter they’re in–- take a toll on the reader. Not an emotional one, as it’s difficult to really care about someone who has had, at most, six paragraphs—but one of clarity. Light of the Jedi would have benefitted from a more structured approach to POV chapters to ease the burden on the reader, who might not be willing to draft a character chart only to have to erase the character a few pages later (although What the Force has provided a basic one, in case you need it.)

The other problem with Light of the Jedi is the Jedi themselves — and your mileage may vary depending on what you think a Jedi is. The Skywalker Saga starred a minimal cast of almost extinct Force users with distinct internal and external conflicts that shaped their personalities and actions. In Light of the Jedi, the Jedi don’t suffer or struggle with internal feelings; their convictions are just that powerful. The Jedi Order is also a lot more flexible than the high-strung Jedi of Anakin’s era — think Qui-Gon Jinn rather than elderly Master Yoda – but still, the serene inner lives of the High Republic Jedi have to be taken at face value for the plot to work.

Most of the feats of these Jedi are based on teamwork, so the point above makes sense – their collectively synchronized use of the Force can alter the trajectory of meteors. Avar Kriss, a powerful Jedi who is able to connect with the Force and all the minds around her, can also communicate basic messages and positions to other members of the Order. However, Avar Kriss’ personality is hugely underdeveloped in Light of the Jedi, as well as the toll that her powers might take – mass-scale telepathy has never been a kind gift for the wielder in any media, except for now.

Charles Soule also promised an adult love story – in the sense of busy grown-ups pushing aside love not for sexy times, but to work and deal with the world around them– but don’t get too excited; it’s as underdeveloped and turbulence-free as the rest of the Jedi’s personalities. Bell Zettifar, a gravity-challenged Jedi padawan who squarely fits the archetype of a boy and his charhound, is the most distinct Jedi of them all – and this might be due to his inexperience… or to his amazing dog.

This light characterization is not a bad thing, necessarily – fans who love the noble superhero aspect of the Jedi will be delighted by all the new abilities that they display in this novel, and authors have the right to slow-burn their romantic subplots for entire trilogies. However, it becomes a problem in a novel with so many Jedi, where they meld into each other’s luminous thoughts and superpowers. That said, in future High Republic novels that only have a couple of Jedi characters and more space, this issue might not be as glaring.

The villains are a different story. The Nihil are a hammy horde of space Vikings that gas first and plunder later and host raves at the best evil banquet hall of the Outer Rim. They are much more diverse than the Jedi, hailing from all corners of the Republic and beyond. While the Nihil’s structure resembles a pyramid scheme – with an Eye at the top and all! – and they are not the brightest enemies of Star Wars by any means, their “boss” has a fascinating secret that twists and subverts many of the mythical themes of the franchise, and which is horrifyingly evil and disturbing at a practical, visceral level — none of that vague “dark side” mysticism, at least for now.

Most of the Nihil are given heaps of characterization – Soule’s creativity shines bright when he humanizes villains, as he showed with his Marvel treatments of the Knights of Ren and Darth Vader. This puts the reader in the strange position of sympathizing more with the death-sticked, bloodthirsty Nihil Gungan slicer than with any of the heroes of the story. Yes, sure, Jedi Barbie and Ken are having tea with the San Tekkas, but please, tell me more about that disaster Nihil teen messing up a basic plot to kidnap some boho miners.

This creates a strange dissonance; the High Republic novels were conceived as an optimistic vehicle set in an era modeled after an idealized version of the Kennedy administration. The mantra “We are all the Republic” appears dozens of times across the novel, and after the third time or so it starts feeling like colonialist propaganda. Everyone in the High Republic feels a little bit brainwashed, but this was clearly not the intention of the writer, who was aiming to convey a sense of hope, collaboration and optimism. It could have worked on Star Trek, but that’s a hard act to pull in the current Star Wars panorama.

The Nihil are the worst but it’s difficult to fear them, no matter how many dark visions Soule throws in the last chapter. However, we all know what happened to the Republic – it eventually became a machine of death, most of its Great Works perverted in service of the Empire. As this has already happened in the future, it’s hard to take the floodlight optimism of Light of the Jedi at face value; it feels extremely forced and as deranged as the Nihil are, it makes one wonder if their leader has a point in detesting the High Republic — his reasons are alluded to, but not explored in the novel.

With a cast so vast, it would have been worth it to replace some of the High Republic advertorial chapters with one taking place on a planet outside of the High Republic colonies to offer a more nuanced perspective. It’s unfortunate that the only planet that fits those parameters is described as an industrialist nest of corruption and swiftly destroyed in the opening chapters.

So, should you read Light of the Jedi? If you are interested at all in the High Republic or if you want to mine some sweet Star Wars lore, it is a good buy. Charles Soule is a good writer and has done a solid job introducing all the basics of the High Republic, and it is a good starting point for this new Star Wars transmedia project. Light of the Jedi also a masterclass of detailed worldbuilding, particularly for such an operatic piece, and the main villain has an interesting modus operandi.

There’s also a whisper of romance here and there – nothing that gets in the way of heroic feats, though – and some interesting mythical themes, particularly on the villain’s side — but the heroes lack characterization and they seem, at times, brainwashed. Unless you have been craving the Kennedy’s Camelot and Superhero!Jedi, this novel might make you roll your eyes a little bit. However, if you are in the market for full-metal villains and wholesome laser sword heroics, Light of the Jedi might be just your jam.

Join our host Marie-Claire Gould (@mariecgould) and co-host for this episode Hammie (@BalancedPadawan) to discuss and Speculate on Star Wars: Visions which...
Read more
Interview

Interview: Amy Richau ( Star Wars: I Love you. I Know)

REVIEW: The High Republic: A Test of Courage by Justina Ireland

Unless you've been hiding under a rock for the past year (and hey, no judgement) you know about The High Republic--the project...
Read more