A list of what to expect from The High Republic 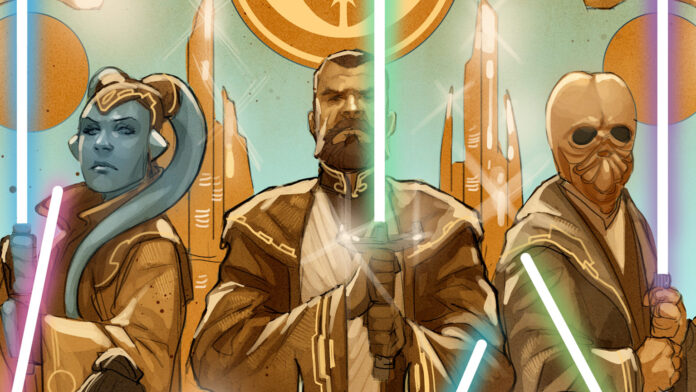 1. A Whole New Galaxy Far Far Away: There are A LOT of Characters

We have pulled together a handy reference to get you started. (Pre-Initial Story Release)

2. “We are all the Republic”: The High Republic has Colonialistic Overtones

3. Once upon a time in the Outer Rim: The Outer Rim Continues to be the Wild West of Star Wars.

It’s difficult to travel there. People do what they need to – to get by. Some of the people seek the Outer Rim for freedom and lack of government. The Republic plans to bring the rule of law to the outer rim will inevitability run into those that disagree with that. Not everyone wants the Jedi to save them from themselves.

We see being a Jedi is to constantly need to reaffirm struggle with their darker sides. There are also Jedi that question the Council’s rules. Mentioned as well is the difference between Celibacy of the Body and Celibacy of the Heart. This is a very different time period where many complex themes in the Jedi dogma are explored.

There are many new ways to describe the force all based on personal perspective. The new powers like Jedi Empathy, Force Experimentation, Force Coordination, and Wayfinding (space navigation using the Force / Force hyperspace navigation) are all interesting and exciting explorations of the Force. ‘Into the Dark’ introduces new dark side Force creatures which show we have a lot to learn about the Force.

The Nihil are intimidating, they look cool and they are insidious in their attempts to cause chaos, reap plunder and destruction. However, they have a point with their beef with the Jedi. So far their methods are efficient as much as they are disorganized. It will be interesting to see if they are the true villains of the High Republic or just a mask for something more sinister.

Order versus Freedom. Loss and Grief, Nature vs. Technology – many Jedi lost their tethering relationships in the books so far. Questioning the Jedi via duty and desire. Found family, hope, and love. On the villainous side: revenge, desire, power and control.

9. Connective Tissue to check out

This is a new time, a different time, and yet it feels like Star Wars. It proves that the connective tissue that is Star Wars is not in the Legacy Characters but in the themes, relationships and exploration of humanity. I have concerns about whether the investment in this period will be treated with the respect deserving of a large world-building effort with the best Star Wars authors in the Disney era. We have seen published works be overwritten or ignored for the sake of Live Action in the recent year. It feels like this may be unavoidable going forward, if I must choose, I hope it’s not the canonical details but the thematic elements that remain true.

According to Star Wars.com:

“In the all-new era of the glorious HIGH REPUBLIC, the noble and wise Jedi Knights must face a frightening threat to themselves, the galaxy, and to the Force itself…

Star Wars: The High Republic launches in January 2021 with original stories spanning a variety of books, comics, and beyond.”

** Thank you to Bea Caicoya and Kyle Larson for contributing thoughts to this list.