Home Articles Investigating the Other: Aliens in Star Wars
Articles

Investigating the Other: Aliens in Star Wars 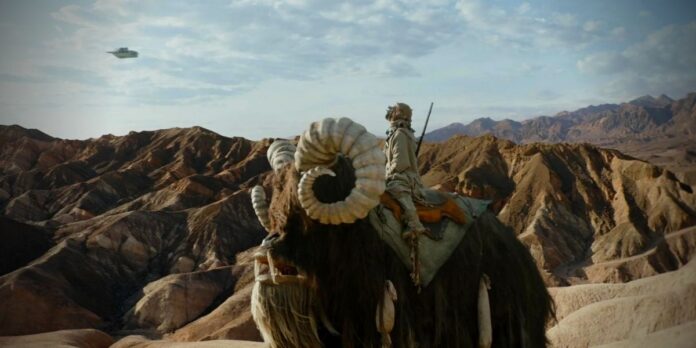 Star Wars has come a long way in terms of representation in its live-action casts. There is a fissure however, between Star Wars’ real-world messaging of inclusion and the in-world story conventions on display in its live-action content, especially when it comes to how different species of aliens are depicted. If, as George Lucas always said, Star Wars is ultimately a universe for instructional stories to teach children, it’s high time that alien species are depicted in a more nuanced fashion than we’ve seen before, which has largely been: cute equals good, threatening or ugly equals bad, with the inscrutable and mysterious lingering somewhere in between.

Firstly, I know the immediate response: from a storytelling perspective, form often follows function; i.e. there’s a specific reason why in The Phantom Menace the heroic Gungans look like dopy, bipedal toads and billed salamanders, while the villainous Trade Federation’s Neimoidians are sneering, noseless amphibians with red goat eyes. It’s simply good design; the very same tenets of filmmaking that allow you to watch a movie on mute and know who’s the hero and who’s the villain—the latter of which for Phantom Menace is a literal evocation of the Devil.

These are all strong visual design choices and are often, deservedly, iconic. My issue with them is not one of content, but of time. Star Wars has been around for over forty years now; it only stands to reason that as culture changes and develops, so too must Star Wars. Mythic trappings remain, but that doesn’t mean the content must stagnate.

The natural evolution of the form is to become self-reflexive, engaging with and benefitting from the meta fashioned by the response of an increasingly progressive society and audience, which then comments upon itself through that altered lens, in turn changing the meta again, and on, and on we go. A depiction of an alien in A New Hope does not carry the same social weight as a depiction of one in modern Star Wars, given how we as a society have attempted—in halting and embarrassingly slow fashion—to combat the racist stereotypes that pervaded our real-world entertainment for decades.

An example: the Tusken Raiders. They are one of the first alien species we encounter in Star Wars and encompass nearly every facet of this issue. In A New Hope, the Tusken Raiders are an antagonistic presence, comparable to the indigenous caricatures present in many early western films: barbarous and frightening, with obscured faces (no face/altered face = scary). They appear again in Attack of the Clones, having captured and tortured the story’s selfless mother figure, Shmi Skywalker. Nearly three decades separated these cinematic appearances, and yet their portrayal remained similar. What conclusion could one draw about the Tuskens as a species from only these appearances?

Even beyond their violent actions, they’re coded as bad or evil through how other characters—our heroes—talk about them. As a child, I thought as such, because I wasn’t given anything else to challenge that assumption, the very same harmful logic that plants the seeds of racism in the real-world, where the very worse acts of a few can be extrapolated and attributed to a vast, diverse whole.

The Mandalorian then, in compelling fashion, chose to deviate from this representation of the Tuskens, first in Season One’s “The Gunslinger” and then in Season Two’s “The Marshall”. In both episodes, but especially the latter, the Tusken Raiders are depicted as a people with a complex culture, survivors in a desolate landscape; living, thinking beings who can strategize, bargain, and consider.

Their differences from the Tuskens that abducted Shmi are as important as their similarities: no culture is a monolith; a single person’s or group’s actions is not representative of the whole. By that logic we could condemn humanity for the slaughter committed by Anakin Skywalker upon his mother’s captors. Anakin—the ostensible hero of Attack of the Clones—engages in a killing spree that famously included women, children, and even the Tusken equivalent of dogs (yikes!).

But by the end of “The Marshall”, I was so invested in the Tuskens’ survival against the Krayt Dragon that I reacted to hearing Cobb Vanth calling them “Sand People” as if it were a slur. And like that, the Tusken Raiders were deepened, no longer faceless boogeymen, but a people, a culture beyond the brutality we’d seen from some of them previously.

This development is what I crave from Star Wars. Not only shiny, updated echoes of the past, but an acknowledgement of an established, often beloved, sometimes simplistic foundation, one which creators can build out and shape into something new. The anti-racism we seek to imbue in children today should extend to the storytelling which they consume, especially in the vital, pre-contextual stages of their development, where information is engaged with on an almost subconscious level.

And yet it is a process. Even The Mandalorian, with its Tusken progressivism, does little to flip the script on the status quo in other areas. The Twi’leks in the show immediately spring to mind. The steady, guiding hand of Hera Syndulla or the bellicose authority of her father, Cham, in the animated show Rebels, are so different from the hissing villainy of Xi’an and Qin from Season One’s episode, “The Prisoner.” Yet if you’ve only seen live-action Star Wars, these two have been your only exposure to Twi’leks aside from Jabba the Hutt’s sycophantic majordomo, Bib Fortuna, and the poor, victimized/sexualized dancer Oola, who was cast into the Rancor Pit. Not exactly the broadest spread of a fairly prominent race in the larger Star Wars canon.

Of course, as stated earlier, design follows function from a storytelling perspective. Considering its age, however, Star Wars only stands to benefit from eschewing and subverting these old tropes, lest it fall into a territory where whole races can be coded as “good” or “evil”.

I think often about a blog post made by Macarthur Grant and Hugo Award winning author, NK Jemisin, where she addressed a message that asked her when she was going to write a real fantasy with orcs. She took issue with the idea of orcs; that in Tolkien and other classic fantasy, there was little investigation into their humanity; that they in sum represented the antagonist: foreign, lesser, human but not, in all ways a warped mirror; a pure embodiment of “the other.” Yes, those are old stories, but not much older than Star Wars, and the investigation Jemisin asks for is simply the grounds for good storytelling and has clearly stuck with me since I’m here typing about a blog post I read seven years ago.

There are no orcs in Star Wars, but we’ve certainly come close in certain alien depictions. Thankfully, the storytelling of Star Wars has been trending away from such moralistic simplicity, especially with entries like Rogue One and The Last Jedi, maintaining its mythic inspiration, while also acknowledging that these figures take many forms. Now to bend that further.

The time is ripe for in-world messaging that says people can be counter to their appearance, and not solely defined by where they’re from, or what species/race they are. We can have a sinister Gungan or valiant Zabrak, a noble Trandoshan or charitable Neimoidian. The Whills know we could use a kind Quarren after this season of The Mandalorian. Choices like these align with the “anyone can be a hero” messaging of Star Wars as well as the property’s real-world push for diversity and inclusion in its casts. The toybox of this galaxy is vast and with changes like these, it will only double in size. I, for one, look forward to it.