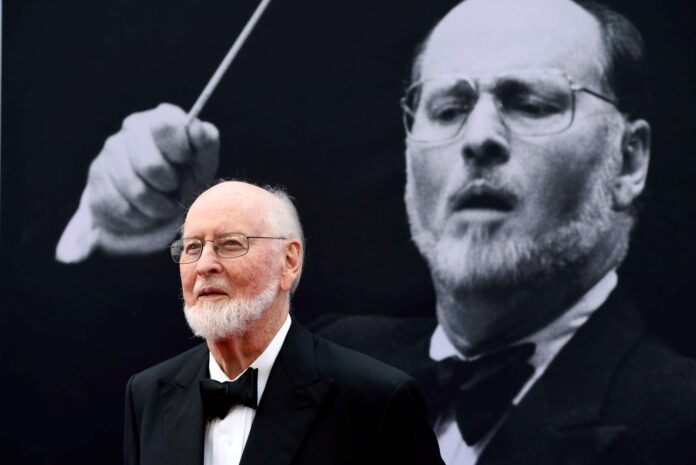 Recently, John Williams gave an interview to Alex Ross of the New Yorker, one of my favorite writers on the topic of film and classical music. Alex presented the Maestro with a copy of Frank Lehman’s famous Complete Catalogue of the Musical Themes of Star Wars – Frank being a scholar and professor at Tufts University who has made it part of his life’s work to document, record, analyze and present the immense body of musical work John Williams (and by extension, John Powell, Michael Giacchino and others) has created through Star Wars.

It’s certainly an impressive document. Ross describes the Maestro as “a bit nonplussed” as he flips through its 56 pages, recognizing the exhaustive work it has taken to compile. As Frank is a personal friend of mine, this is one of my favorite parts of the interview, but it’s shortly after this exchange where the ever-eloquent Williams said something that really captured my imagination.

As Ross and Williams discussed the powerful effect that the Star Wars leitmotifs have, extending across lifetimes and generations, Alex could vividly remember seeing the first Star Wars film at age 9 in 1977. I certainly felt the same sense of deja vu and completion of a circle as I watched The Rise of Skywalker this past December, realizing with a sudden bittersweet agony that I would never again sit down for a premiere of a Star Wars film scored entirely by John Williams. J. Dubs (John Williams’ nickname in the musical community) nods at the story and says,

“It’s a little bit like how the olfactory system is wired with memory, so that a certain smell makes you remember your grandmother’s cooking,” he said. “A similar thing happens with music. Really, at the root of the question is something about our physiological or neurological setup we don’t understand. It has to do with survival, or protection of group identity, or God knows what. Music can be so powerful, even though it wafts away and we chase it.”

For so many of us who have Star Wars hard-wired into our brains, flowing through our bloodstream, making up our DNA – John Williams’ music is the through-line. As John Favreau, Ludwig Goransson and Dave Filoni said in their behind the scenes of The Mandalorian Gallery episode, and as M-C and I discussed on the podcast, music has always been the one thing every Star Wars fan agrees on; it’s iconic and perfect.

In the interview, they describe music as a lightning rod, but I think they meant the anti-lightning rod – an element of the films and story that very rarely attracts criticism or controversy. It has become such an important part of us and our shared culture, and it was handled by someone with such a high level of genius, creativity, professionalism and emotional intelligence, that we cannot remove it from our experience of Star Wars and our experience of ourselves. We have a neurological, physiological response – even for people who are newer to the fandom and don’t have associated childhood memories. You hear those leitmotifs and they stay with you forever. But how was this accomplished?

John says in the New Yorker profile that the leitmotifs needed to cut through the “noise” – all the groundbreaking visual effects, the innovative sound effects, the overall pageantry – and be the audience’s connection to the character’s inner worlds. They “at least need to be pretty—not accessible, but succinct,” he said. “Eighty or ninety percent of the attention is focussed elsewhere. The music has to cut through this noise of effects. So, O.K., it’s going to be tonal. It’s going to be D major. The tunes need to speak probably in a matter of seconds—five or six seconds.” I encourage you now to sing some of the themes to yourself (or pull them up on YouTube) and count the seconds on your fingers – the main theme, Princess Leia’s theme, the Force theme. Their brevity and succinctness, while somehow simultaneously achieving the status of an earworm and packing an emotional punch, is their brilliance.

I read a fascinating article comparing the way Williams constructs his themes to the way hit pop songs are crafted; from literal structure of introduction – verse – chorus – bridge to the harmonic language being used. There have also been multiple articles clarifying the classical composers and works that are deeply baked into the musical language of Star Wars – as Williams says in the Ross interview, “People say they hear Wagner in ‘Star Wars,’ and I can only think, ‘It’s not because I put it there.’ Now, of course, I know that Wagner had a great influence on Korngold and all the early Hollywood composers. Wagner lives with us here—you can’t escape it. I have been in the big river swimming with all of them.”

This isn’t the first time the Maestro has compared the long tradition of classical orchestral music and film music to a vast river that we are all swimming in, winding its sparkling way through our lives. He rose from the river with his hands cupped, holding a portion of that rushing water, blending it with his own gifts to capture our imaginations and our subconscious.

I am also extremely partial to the analysis work done by Mark Richards at Filmmusicnotes.com. Here he discusses the structure of the Force Theme:

Each “main” theme that John Williams has carefully constructed for the vast Star Wars canon represented in the pages of Lehman’s work can be analyzed in this way. They speak not only to the drama of the narrative but to the inner character development and mythological subtext. Quite often they are their OWN character in the narrative, or they are foreshadowing (Rey’s theme containing seeds of the Emperor’s theme), or they are calling back to the past. Sometimes they are communicating a character’s thoughts in such a way that only the eagle-eared can catch a quote of a motif, a whisper of an idea; sometimes they begin as a simple statement of the first “idea” of a theme that will be fleshed out in great depth later, growing as the relationship between two characters grows (I am thinking especially of Across the Stars in Attack of the Clones.) Sometimes a simple harmonic readjustment and chromatic alteration can change a sinister, conflicted Bad Guy theme into a warm, open, heartfelt and soaringly brave Redeemed Good Guy theme (Of course I’m thinking of Ben Solo.)

Something that at face value appears deceptively simple opens up a world of meaning, layers of emotional resonance that perfectly represents the story and where it’s taking us. That is the genius of John Williams. Herein lies his true immortality. It’s not just Star Wars of course; we must recognize the huge impact his scores have had through multiple films and franchises over the past 40-some years. Jaws, Jurassic Park, Superman, Close Encounters, Home Alone, Hook, Empire of the Sun, A.I., E.T., Harry Potter, Indiana Jones, Schindler’s List – I can go on (and often do.) But it’s indelibly Star Wars that anyone across the world can sing if you ask them. Star Wars captures the imagination so profoundly.

Our “group identity” as fans has never been more fractured and contentious. Different segments of the fandom are digging in and seeking to gatekeep “the other”, justifying through a long list of requirements who is deemed “a real fan.” However, As Marie-Claire Gould so beautifully illustrated in her recent essay, we should actually be moving beyond ideas of duality in this way. We should make space for our light and our shadow simultaneously, and seek that concept out in the storytelling.

This is why I return to John Williams’ metaphor of the river. This quote is so profound for me, I have it on my website and as my email signature: “Music is there for everybody. It’s a river we can all put our cups into, and drink it, and be sustained by it.” The river flows on – no man ever steps in the same river twice, as Heraclitus put it – and we return again and again to its life-giving waters, the past, present and future mingling together. This is what the future of Star Wars must do, and the future of Star Wars music.

John Williams has beautifully illustrated how music can truly both serve and transcend the story; the next generation of composers is picking up that mantle and showing us new ways to capture the imaginations of the next generation of fans. The river outlasts us all, and so will the Maestro’s music. He has achieved true immortality through something that you can grasp immediately, but also spend a lifetime analyzing. I suggest we always approach Star Wars through this lens and appreciate it on both levels.

Christy Carewhttp://www.christycarew.com/
Christy is an award-winning composer working in Hollywood, a 32-year Star Wars nut, and a huge John Williams fan. She was chosen as a composer fellow for the prestigious 2018 Sundance Institute Film Music Lab which took place at Skywalker Sound. Christy also writes about the music of Star Wars on Tumblr. She can be reached on Twitter @Christy_Carew or on her Site.

Join our host Marie-Claire Gould (@mariecgould) and co-host for this episode Missy (@Fangirling_0nly / https://www.tumblr.com/allgirlsareprincesses) in our Segment the Power...
Read more

Andor Declassified: Episode 10 One Way Out